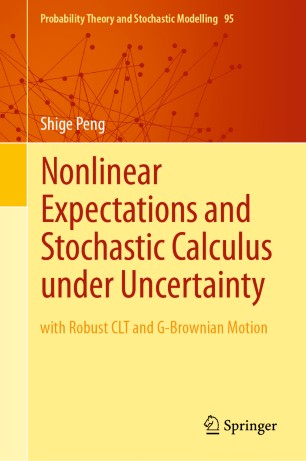 with Robust CLT and G-Brownian Motion

This book is based on Shige Peng’s lecture notes for a series of lectures given at summer schools and universities worldwide. It starts with basic definitions of nonlinear expectations and their relation to coherent measures of risk, law of large numbers and central limit theorems under nonlinear expectations, and develops into stochastic integral and stochastic calculus under G-expectations. It ends with recent research topic on G-Martingale representation theorem and G-stochastic integral for locally integrable processes.

With exercises to practice at the end of each chapter, this book can be used as a graduate textbook for students in probability theory and mathematical finance. Each chapter also concludes with a section Notes and Comments, which gives history and further references on the material covered in that chapter.

Shige Peng received his PhD in 1985 at Université Paris-Dauphine, in the direction of mathematics and informatics, and 1986 at University of Provence, in the direction of applied mathematics. He now is a full professor in Shandong University. His main research interests are stochastic optimal controls, backward SDEs and the corresponding PDEs, stochastic HJB equations. He has received the Natural Science Prize of China (1995), Su Buqing Prize of Applied Mathematics (2006), TAN Kah Kee Science Award (2008), Loo-Keng Hua Mathematics Award (2011), and the Qiu Shi Award for Outstanding Scientists (2016).

“The book is very interesting and useful for the specialists in stochastic calculus and its financial and other applications. It is written in a very clear language and therefore can be used for graduate students and practitioners. It presents very recent and modern subjects and so it will find a wide audience.” (Yuliya S. Mishura, zbMATH 1427.60004, 2020)
Buy options