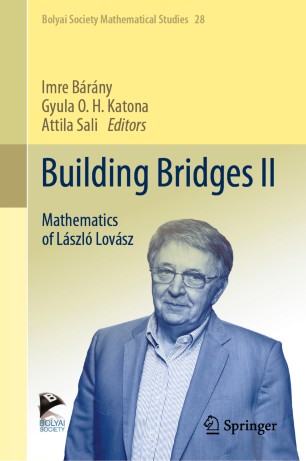 This volume collects together research and survey papers written by invited speakers of a conference celebrating the 70th birthday of László Lovász.

The topics covered include classical subjects such as extremal graph theory, coding theory, design theory, applications of linear algebra and combinatorial optimization, as well as recent trends such as extensions of graph limits, online or statistical versions of classical combinatorial problems, and new methods of derandomization.

László Lovász is one of the pioneers in the interplay between discrete and continuous mathematics, and is a master at establishing unexpected connections, “building bridges” between seemingly distant fields. His invariably elegant and powerful ideas have produced new subfields in many areas, and his outstanding scientific work has defined and shaped many research directions in the last 50 years.

The 14 contributions presented in this volume, all of which are connected to László Lovász's areas of research, offer an excellent overview of the state of the art of combinatorics and related topics and will be of interest to experienced specialists as well as young researchers.

Imre Bárány is a research professor at the Alfréd Rényi Institute of Mathematics in Budapest and the Astor Professor of Mathematics at University College London. His main field of interest is discrete and convex geometry, in particular random points and lattice points in convex bodies, with applications in computer science, operations research, and elsewhere. He was an invited speaker at ICM 2002, Beijing. He has organized several conferences in discrete and convex geometry, including three in Oberwolfach on Discrete Geometry.

Gyula O.H. Katona is a research professor emeritus at the Alfréd Rényi Institute of Mathematics in Budapest. His main field of interest is combinatorics, including extremal problems for graphs and hypergraphs, connections to probability theory and measure theory, the theory of databases, search theory, and cryptology. He is a member of the European Academy of Sciences, ordinary member of the Hungarian Academy of Sciences and foreign member of the Bulgarian Academy of Sciences. He has organized more than 15 conferences in combinatorics, more than half of them as chairman of the organizing committee. He is a member of the editorial boards of 22 leading journals in combinatorics. He has received several awards, the most prestigious being the Order of Merit of the Hungarian Republic (civilian), the Officer Cross, awarded by the President of Hungary, 2004, and the Széchenyi Prize, awarded by the President of Hungary, 2005.

Attila Sali is a research professor at the Alfréd Rényi Institute of Mathematics in Budapest. His main field of interest is combinatorics, with a focus on extremal problems for graphs and hypergraphs, and the combinatorics of databases. He has also done extensive research in algebraic combinatorics. He is a recipient of the Excellent Young Researcher award of the Hungarian Academy of Sciences. He has been the secretary of the organizing committee of about 10 combinatorial conferences, and served as chair of the program committee at FoIKS 2012.