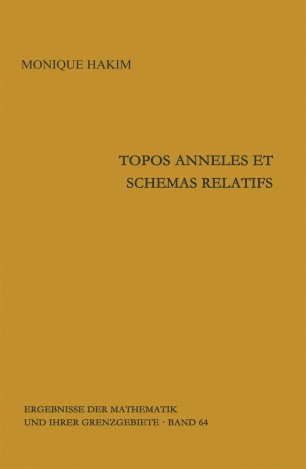 From the reviews (Zentrallblatt MATH):
"This monograph is devoted to the problems of modules in scheme theory; the main purpose is to develop relative scheme theory over a ringed space. The exposition contains 8 chapters. Chapters I and II are devoted to the necessary information about 2-categories which simplifies the utilization of toposes. 2-category is a category in which the sets Hom are categories and where maps between Hom's have functorial nature. One studies U-toposes by means of this notion in chapter II, U being a fixed universimum. One introduces the notion of ringed U-toposand studies U-toposes ringed by local and strict local rings in chapter III. In the same chapter one solves the corresponding universal problem and as a result introduces the spectrum of ringed U-topos in chapter IV, what makes it possible to define the category of relative schemes over a ringed topos. In chapter V-VII the theory of relative S-schemes is developed where S is a ringed topos; then this theory applies to studying of the algebraic-analytic equivalence in chapter VIII."