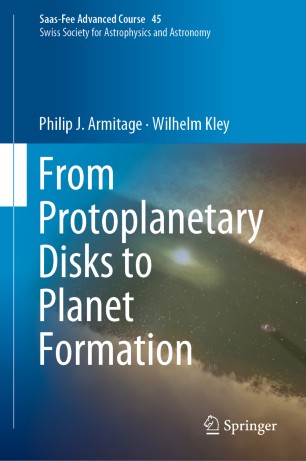 From Protoplanetary Disks to Planet Formation

Is the Sun and its planetary system special? How did the Solar system form? Are there similar systems in the Galaxy? How common are habitable planets? What processes take place in the early life of stars and in their surrounding circumstellar disks that could impact whether life emerges or not?

This book is based on the lectures by Philip Armitage and Wilhelm Kley presented at 45th Saas-Fee Advanced Course „From Protoplanetary Disks to Planet Formation“ of the Swiss Society for Astrophysics and Astronomy. The first part deals with the physical processes occurring in proto-planetary disks starting with the observational context, structure and evolution of the proto-planetary disk, turbulence and accretion, particle evolution and structure formation. The second part covers planet formation and disk-planet interactions. This includes in detail dust and planetesimal formation, growth to protoplanets, terrestrial planet formation, giant planet formation, migration of planets, multi-planet systems and circumbinary planets.

As Saas-Fee advanced course this book offers PhD students an in-depth treatment of the topic enabling them to enter on a research project in the field.

Philip Armitage was born in 1971 just outside of London in Sevenoaks, Kent, England. At Cambridge University, he studied physics and theoretical physics, earning a B. A. in 1993. He earned a doctorate in 1996 for a study of accretion disks around young stars with Cathie Clark at Cambridge’s Institute of Astronomy. He was then a postdoc at the Canadian Institute of Theoretical Astrophysics at the University of Toronto (1996–1999). At Toronto, he continued his studies of accretion disks and began studies of planet formation. Next, he spent another postdoctoral year at the Max Planck Institute for Astrophysics in Munich. From 2000 to 2002 he was assistant professor at the University of St. Andrews in Scotland, and has been an assistant, associate and then full professor of the Department of Astrophysical and Planetary Sciences at the University of Colorado and Fellow of JILA since 2002. He has continued his research on accretion disks, on the formation and evolution of extrasolar planetary systems, and on the astrophysics of black holes. In 2018 he took up a joint position at Stony Brook University and the Center for Computational Astrophysics at the Flatiron Institute.

Wilhelm Kley studied physics and astronomy at the Universities of Bochum, Sussex and Munich. He obtained his PhD in physics at the Ludwig-Maximilians University (München) in 1988, and spent then 3 years as postdoc time at UC Santa Cruz and Queen Mary College London. He stayed for 6 years at Friedrich Schiller University (Jena) as postdoc and senior researcher, and another year as postdoc at Max-Planck Institute for Astronomy (Heidelberg). Since October 2001 he is full professor of Computational Physics at Eberhard-Karls University Tübingen. The focus of his research lies in the fields of Computational Astrophysics, Planet Formation, Accretion Disk Physics.

Marc Audard (born 1974, M. Sc Physics, University of Lausanne; PhD, ETHZ) works on star formation, with an emphasis on the observational properties of protoplanetary disks in young outbursting sources. After his PhD in 2002 at the Paul Scherrer Institut and ETH Zurich, he was postdoc and then Associate Research Scientist at Columbia University in New York City where he shifted his research field from stellar coronae to star formation from a multi-wavelength perspective. In 2006 he returned to Switzerland as Swiss National Science Foundation Professor at the Department of Astronomy at the University of Geneva. Since 2012 he is Maître d'enseignement et de recherche, working on the ASTRO-H/Hitomi project until his demise, and then on the Gaia mission in the Coordination Unit 7 on variability processing. Since 2018 he is also Executive Secretary of the European Astronomical Society.

Michael R. Meyer (born 1967, A.B. Physics, Washington Univerisity in St.Louis, M.S. in Physics, University of Missouri, PhD in Astronomy, University of Massachusetts) was Chair of Star and Planet Formation at the ETH in Zürich (2009-2016) and was formerly a Professor/Astronomer at the Department of Astronomy/Steward Observatory of the University of Arizona (2000-2009).  He was a Hubble Fellow at the University of Arizona (1997-2000) and did a post-doc at the Max-Planck-Institute for Astronomie (1995-1997).  He has more than 20 years of international scientific research experience, in the fields of galactic and infrared astronomy, as well as the formation, evolution, and characterisation of planetary systems (and associated implications on the prospects for life in the Universe).  He has experience participating in the development of ground- and space-based instrumentation, including both the NIRCam and NIRISS instruments for the James Webb Space Telescope as well as high contrast imaging systems/spectrographs for 6-10 meter telescopes and next generation extremely large telescopes.

Yann Alibert was born in 1974. He made his studies at the Ecole Normale Supérieure in Lyon (France), and obtained there his PhD in 2001. He then spent 6 years as a postdoc at the University of Bern (Switzerland) and obtained in 2007 a CNRS position in Besançon (France). He went back to Bern after being awarded an ERC Starting Grant in 2010. In 2014, he became Science Officer of the NCCR PlanetS. He is working on theoretical models of planet formation and evolution, habitability, member of different observation consortia among which CHEOPS and ESPRESSO. He recently shifted part of his research towards machine and deep learning.