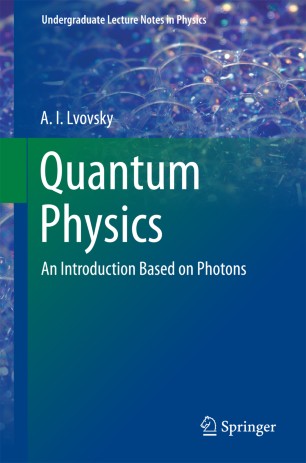 An Introduction Based on Photons

This textbook is intended to accompany a two-semester course on quantum mechanics for physics students. Along with the traditional material covered in such a course (states, operators, Schrödinger equation, hydrogen atom), it offers in-depth discussion of the Hilbert space, the nature of measurement, entanglement, and decoherence – concepts that are crucial for the understanding of quantum physics and its relation to the macroscopic world, but rarely covered in entry-level textbooks.

The book uses a mathematically simple physical system – photon polarization – as the visualization tool, permitting the student to see the entangled beauty of the quantum world from the very first pages. The formal concepts of quantum physics are illustrated by examples from the forefront of modern quantum research, such as quantum communication, teleportation and nonlocality.

The author adopts a Socratic pedagogy: The student is guided to develop the machinery of quantum physics independently by solving sets of carefully chosen problems. Detailed solutions are provided.

Alexander Lvovsky is an experimental physicist. He was born and raised in Moscow and studied Physics at the Moscow Institute of Physics and Technology. In 1993, he moved to Columbia University in New York City for his graduate studies. His thesis research, conducted under the supervision of Dr. Sven R. Hartmann, was in the field of coherent optical transients in atomic gases. After completing his Ph. D. in 1998, he spent a year at the University of California, Berkeley as a postdoctoral fellow, and then five years at Universität Konstanz in Germany, first as an Alexander von Humboldt postdoctoral fellow, then as a research group leader in quantum-optical information technology. In 2004 he became Professor in the Department of Physics and Astronomy at the University of Calgary, where he remains today with a part-time appointment as a research group leader at the Russian Quantum Center in Moscow. Alexander is a past Canada Research Chair, a lifetime member of the American Physical Society, a Fellow of the Optical Society of America and a winner of many awards – most notably the International Quantum Communications Award, personal commendation letter from the Prime Minister of Canada, the Alberta Ingenuity New Faculty award and the Emmy Noether research award of the German Science Foundation. Alexander conducts wide-profile experimental and theoretical research on synthesis, manipulation, measurement and storage of quantum optical information for applications in quantum technology.