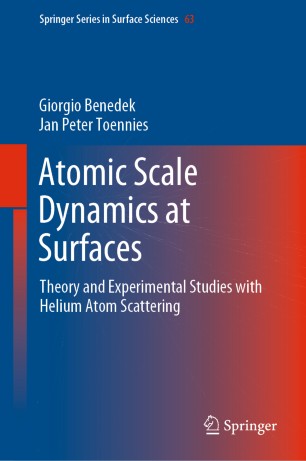 Experimental advances in helium atom scattering spectroscopy over the last forty years have allowed the measurement of surface phonon dispersion curves of more than 200 different crystal surfaces and overlayers of insulators, semiconductors and metals. The first part of the book presents, at a tutorial level, the fundamental concepts and methods in surface lattice dynamics, and the theory of atom-surface interaction and inelastic scattering in their various approximations, up to the recent electron-phonon theory of helium atom scattering from conducting surfaces. The second part of the book, after introducing the experimentalist to He-atom spectrometers and the rich phenomenology of helium atom scattering from corrugated surfaces, illustrates the most significant experimental results on the surface phonon dispersion curves of various classes of insulators, semiconductors, metals, layered crystals, topological insulators, complex surfaces, adsorbates, ultra-thin films and clusters. The great potential of helium atom scattering for the study of atomic scale diffusion, THz surface collective excitations, including acoustic surface plasmons, and the future prospects of helium  atom scattering are presented in the concluding chapters. The book will be valuable reading for all researchers and graduate students interested in dynamical processes at surfaces.