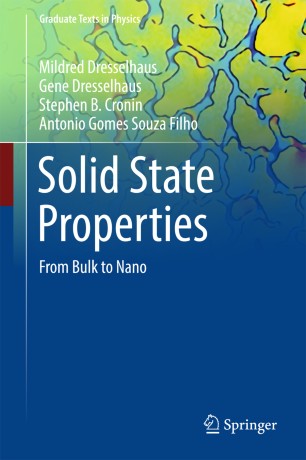 From Bulk to Nano

This book fills a gap between many of the basic solid state physics and materials science
books that are currently available. It is written for a mixed audience of electrical
engineering and applied physics students who have some knowledge of elementary
undergraduate quantum mechanics and statistical mechanics. This book, based on a
successful course taught at MIT, is divided pedagogically into three parts: (I) Electronic
Structure, (II) Transport Properties, and (III) Optical Properties. Each topic is explained
in the context of bulk materials and then extended to low-dimensional materials where
applicable. Problem sets review the content of each chapter to help students to understand
the material described in each of the chapters more deeply and to prepare them to master
the next chapters.

Mildred S. Dresselhaus is professor of physics and electrical engineering and emeriti institute professor, Massachusetts Institute of Technology, Cambridge, USA. She is recipient of numerous awards, including the National Medal of Science, the Enrico Fermi Award (2012) and the Kavli Prize in Nano science (2012). Known for her work on carbon nano tubes, graphite, graphite intercalation compounds, fullerenes and low dimensional thermoelectric, she lends her name to several physical theories. Positions and awards of  Mildred Dresselhaus:

• Director, Office of Science, US Department of Energy, August 2000–January 2001

• Elected to membership in the National Academy of Engineering, 1974

• Elected to membership in the National Academy of Sciences, 1985

• Elected as a Foreign Associate of the Engineering Academy of Japan, 1993

• Elected to Membership in the American Philosophical Society, 1995

• Hall of Fame Award by Women in Technology International (WITI), 1998

• Elected to Fellow of the American Carbon Society, 1999

• National Materials Advancement Award of the Federation of Materials Societies, 2000

• Heinz Award for Technology, the Economy, and Employment, May 2005

• Elected Foreign Fellow of the National Academy of Sciences of India, 2006

• Member of National Academy of Engineering