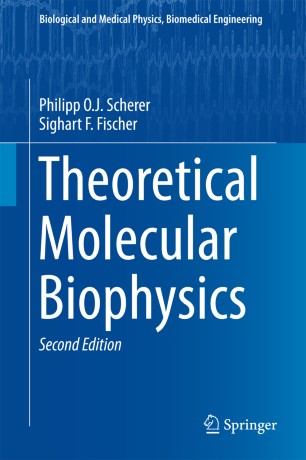 This book gives an introduction to molecular biophysics. It starts from material properties at equilibrium related to polymers, dielectrics and membranes. Electronic spectra are developed for the understanding of elementary dynamic processes in photosynthesis including proton transfer and dynamics of molecular motors. Since the molecular structures of functional groups of bio-systems were resolved, it has become feasible to develop a theory based on the quantum theory and statistical physics with emphasis on the specifics of the high complexity of bio-systems. This introduction to molecular aspects of the field focuses on solvable models. Elementary biological processes provide as special challenge the presence of partial disorder in the structure which does not destroy the basic reproducibility of the processes. Apparently the elementary molecular processes are organized in a way to optimize the efficiency. Learning from nature by means exploring the relation between structure and function may even help to build better artificial solar cells.
The reader is exposed to basic concepts in modern biophysics, such as entropic forces, phase separation, potential of mean force, electron and proton transfer, heterogeneous reactions, coherent and incoherent energy transfer as well as molecular motors. Basic knowledge in classical and Quantum mechanics, electrostatics and statistical physics is desirable. Simplified models are presented which can be solved in limited cases analytically from the guiding lines to generate the basis for a fundamental understanding of the more complex biophysical systems. Chapters close with challenging problems whose solutions are provided at the end of the book to complete the pedagogical treatment in the book.
To the second edition several new chapters were added. The medium polarization is treated self-consistently using basic elements of polaron theory and more advanced nonlinear Schrödinger equations to describe the dynamics of solvation. Ion transport through a membrane was extended by the discussion of cooperative effects. Intramolecular transitions are now discussed in the new edition in much more detail, including also radiationless transitions. Very recent developments in spectroscopy are included, especially two-dimensional and hole-burning spectroscopy. The discussion of charge transfer processes was extended by including recent results of hole transfer in DNA in connection with the super-exchange mechanism. The chapter on molecular motors was rewritten to include the most recent developments of new models.
The book is a useful text for students and researchers wanting to go through the mathematical derivations in the theories presented. This book attracts a group of applied mathematically oriented students and scholars to the exciting field of molecular biophysics.

Philipp Scherer received his PhD in experimental and theoretical physics in 1984 with Prof. Wolfgang Kaiser and Prof. Sighart Fischer in Munich. From 1985-1999 he was postdoc at Technische Universität München where he received his habilitation in theoretical physics in 1996. In 2001 and 2003 he spent several months as a visiting scientist at AIST in Tsukuba, Japan. Since 1999 he is lecturer at TUM, from 2006-2008 he was temporary leader of the institute for theoretical biomolecular physics at TUM , since 2008 he is adjunct professor at TUM.

Sighart Fischer received his PhD in theoretical physics in 1965 with Professor F. Hund in Göttingen. From 1966-1969 he was postdoctoral fellow and instructor at Northwestern University and at the University of Chicago. From 1970-1974 he was professor at the Nortwestern University, Evanston, since 1974 Universitätsprofessor für Theoretische Physik at Technische Universität München, and since 2006 he is an emeritus of excellence.