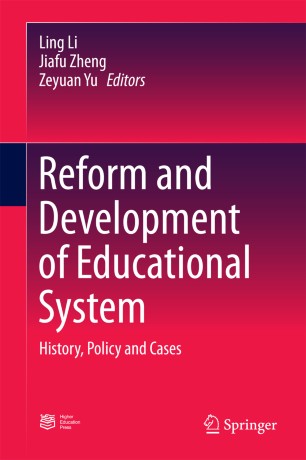 Reform and Development of Educational System

In this book, the authors pursue quantitative, qualitative and mixed methods approaches, conducting hundreds of large-scale surveys and in-depth interviews in 679 schools, 67 counties and 13 provinces throughout China. They also conducted longitudinal case studies in five municipalities and provinces to better reflect education reform and development in different education levels or sectors. The authors used national statistical data from the 1970s to 2013, as well as a wealth of first-hand documents and data from different levels of educational departments in schools, counties, municipals and provinces and “grass-roots” input from 253 teachers, principals, education administrators and students. The authors applied SEM, HLM, GCM, and many other statistic techniques and qualitative methods to analyse the data and materials in order to explore correlations between development and reform, internal and external factors in educational reforms, as well as strategies for resolving core issues. Their findings indicate that institutional reforms concerning financial investments, allocation of teaching resources, allocation of facilities, curricula design systems, and political, economic, social system reforms all contribute to the development of different levels and types of education in different modes and to different extents. Topics of particular interest include five case studies conducted in five different municipalities and provinces that showcase the nation’s education reform and development in a specific model and on the basis of substantial data. Further, milestone events regarding educational reform and development that have taken place in China since 2013 are examined. As a unique feature, the book also includes 353 diagrams and tables on the development and reform of education in China, offering extensive and up-to-date information on a part of the world that often remains difficult to access. The book provides an expansive and in-depth examination of the nation’s education reform and development, from its historical roots to the present, and combining official and “grass-roots” standpoints. It will help readers to understand why and how Chinese education could lead students to win in international comparisons like PISA while at the same time often being the target of scathing criticism, as well as how the nation is now working to provide a better education to serve the world’s largest population.

Ling Li is a faculty member of the Center for Education Policy in the Faculty of Education at the Southwest University, China. She received her doctorate from the Ontario Institute for Studies in Education at the University of Toronto. She headed and accomplished two key national projects funded by the Ministry of Education: “Constructing An Integrated Educational and Institutional System in the Urban and Rural Areas in China” and “The Reform and Development of Education System in China.” Li has published two English books in Springer and VDM, three Chinese books in the Higher Education Press in China, and more than 70 articles in Chinese top journals and the SSCI journals abroad. Li also contributes to Chinese education reform and policy making by providing 10 consultation reports for the Ministry of Education and provincial bureaus of education. Noted by its broad strategic vision, first-hand materials collected from field research, big data analysis, as well as interdisciplinary approaches, Ling Li’s work has played a pivotal role in helping innovate Chinese education policy analysis and its research methods.