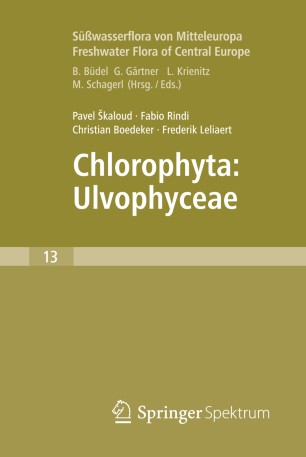 This volume covers the freshwater, aerophytic, and terrestrial green algae of the Ulvophyceae, one of the main classes of green algae, comprising about 1,700 species. Although most of this diversity is found in the marine environment, a substantial number of species also occurs in brackish, freshwater, and aero-terrestrial habitats.

This volume serves as a reference work for identifying these green algae by providing keys, detailed descriptions, and illustrations of the more than 100 European species, along with descriptions of more than 100 non-European taxa.

The present study incorporates the latest findings in phylogeny, ultrastructure and morphology for the classification, and delimitation of species. In addition, it significantly revises the taxonomy of ulvophytes, based on new molecular phylogenetic data. One order and one family are resurrected (Chlorocystidales and Chlorocystidaceae), and six families and one genus are newly described (Pseudopleurococcaceae, Binucleariaceae, Planophilaceae, Hazeniaceae, Trichosarcinaceae, and Neocloniaceae with the new genus Neoclonium).

Pavel Škaloud – Associate Professor at the Charles University, Prague, Czech Republic. His focus is on the diversity, species concept, and symbiotic associations of algae. By combining molecular, morphological and ecological data, he aims to untangle the drivers of diversification of evolutionary young species complexes. He is interested mainly in terrestrial and symbiotic green algae, desmids, and silica-scaled chrysophytes.

Fabio Rindi – Senior lecturer at the Università Politecnica delle Marche, Ancona, Italy. His focus is on diversity, molecular phylogeny, ecology and conservation of algae. His primary interest is to clarify evolutionary relationships and species boundaries in several algal groups, both marine and terrestrial. Green algae of the orders Trentepohliales, Prasiolales and Klebsormid

iales are the main targets of his research.

Christian Boedeker – Postdoctoral Fellow at Victoria University of Wellington, New Zealand. His focus is the diversity and evolution of the green algal order Cladophorales.

Frederik Leliaert – Research director at the Botanic Garden Meise and visiting professor at Ghent University. His focus is on the diversity, distribution and genetics of algae. By using molecular, morphological, ecological and geographic data, he aims to resolve evolutionary relationships, test species boundaries, and explore the biogeographical history of marine and freshwater algae.