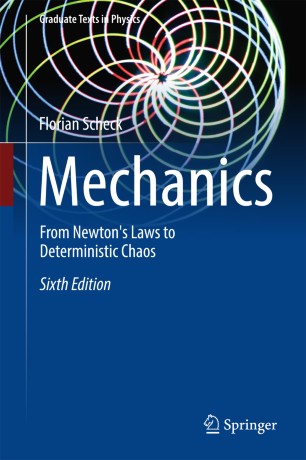 From Newton's Laws to Deterministic Chaos

This book covers all topics in mechanics from elementary Newtonian mechanics, the principles of canonical mechanics and rigid body mechanics to relativistic mechanics and nonlinear dynamics. It was among the first textbooks to include dynamical systems and deterministic chaos in due detail. As compared to the previous editions the present 6th edition is updated and revised with more explanations, additional examples and problems with solutions, together with new sections on applications in science.

Symmetries and invariance principles, the basic geometric aspects of mechanics as well as elements of continuum mechanics also play an important role. The book will enable the reader to develop general principles from which equations of motion follow, to understand the importance of canonical mechanics and of symmetries as a basis for quantum mechanics, and to get practice in using general theoretical concepts and tools that are essential for all branches of physics.

The book contains more than 150 problems with complete solutions, as well as some practical examples which make moderate use of personal computers. This will be appreciated in particular by students using this textbook to accompany lectures on mechanics. The book ends with some historical notes on scientists who made important contributions to the development of mechanics.