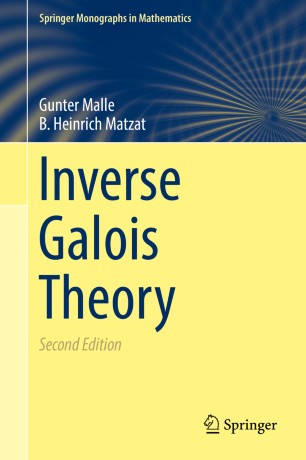 This second edition addresses the question of which finite groups occur as Galois groups over a given field. In particular, this includes the question of the structure and the representations of the absolute Galois group of K, as well as its finite epimorphic images, generally referred to as the inverse problem of Galois theory.

In the past few years, important strides have been made in all of these areas. The aim of the book is to provide a systematic and extensive overview of these advances, with special emphasis on the rigidity method and its applications. Among others, the book presents the most successful known existence theorems and construction methods for Galois extensions and solutions of embedding problems, together with a collection of the current Galois realizations.

There have been two major developments since the first edition of this book was released. The first is the algebraization of the Katz algorithm for (linearly) rigid generating systems of finite groups; the second is the emergence of a modular Galois theory. The latter has led to new construction methods for additive polynomials with given Galois group over fields of positive characteristic. Both methods have their origin in the Galois theory of differential and difference equations.

Gunter Malle is professor of mathematics at the TU Kaiserslautern, Germany. He completed his doctorate at the TH Karlsruhe in 1986 with a dissertation on "Exzeptionelle Gruppen vom Lie-Typ als Galoisgruppen". He obtained his first professorship at Kassel University in 1998, and in 2005 was offered his current position. His research focus is on group representation theory and number theory. He is the coauthor of the books "Linear Algebraic Groups and Finite Groups of Lie Type" and "Inverse Galois Theory" as well as of multiple journal articles. He is currently serving on the editorial boards of six journals.

Bernd Heinrich Matzat is professor of mathematics at the University of Heidelberg, Germany. In 1972 he earned his doctorate at the University of Karlsruhe with a dissertation on "Über Weierstraßpunkte von Fermatkörpern", and in 1981 his Dr. habil. with the paper "Zur Konstruktion von Zahl- und Funktionenkörpern mit vorgegebenen Galoisgruppen". His first professorship was at the TU Berlin in 1987 and he moved from there to Heidelberg University in 1988. His research focus is on inverse Galois theory and differential Galois theory. He is author of the books "Konstruktive Galoistheorie", "Algorithmic algebra and number theory" and "Inverse Galois Theory" as well as of multiple journal articles.