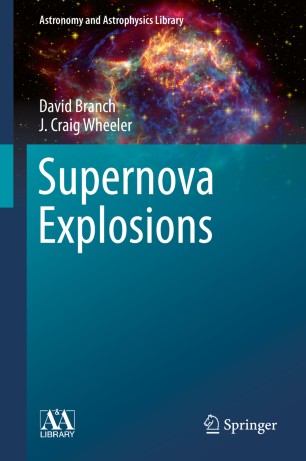 Targeting advanced students of astronomy and physics, as well as astronomers and physicists contemplating research on supernovae or related fields, David Branch and J. Craig Wheeler offer a modern account of the nature, causes and consequences of supernovae, as well as of issues that remain to be resolved.

Owing especially to (1) the appearance of supernova 1987A in the nearby Large Magellanic Cloud, (2) the spectacularly successful use of supernovae as distance indicators for cosmology, (3) the association of some supernovae with the enigmatic cosmic gamma-ray bursts, and (4) the discovery of a class of superluminous supernovae, the pace of supernova research has been increasing sharply. This monograph serves as a broad survey of modern supernova research and a guide to the current literature.

The book’s emphasis is on the explosive phases of supernovae. Part 1 is devoted to a survey of the kinds of observations that inform us about supernovae, some basic interpretations of such data, and an overview of the evolution of stars that brings them to an explosive endpoint. Part 2 goes into more detail on core-collapse and superluminous events: which kinds of stars produce them, and how do they do it? Part 3 is concerned with the stellar progenitors and explosion mechanisms of thermonuclear (Type Ia) supernovae. Part 4 is about consequences of supernovae and some applications to astrophysics and cosmology. References are provided in sufficient number to help the reader enter the literature.

David Branch received his Ph.D. in astronomy from the University of Maryland in 1969.  He then served as Postdoctoral Research Fellow at the Goddard Space Flight Center (1969), the California Institute of Technology (1969-70), and the Royal Greenwich Observatory, England, (1970-73).  During those years he worked on the spectroscopic determination of the relative abundances of the chemical elements in the Sun and stars, and began to work on the interpretation of the spectra of supernovae.  In 1973 he joined the faculty of the University of Oklahoma as Assistant Professor and became Full Professor in 1981.  From 1985 to 1990 he served as Chair of the Department of Physics and Astronomy.  In 1987 he received the career appointment of George Lynn Cross Research Professor.  During his tenure at Oklahoma he also held Visiting-Professor appointments at the University of Texas (1979-80), Oxford University (1980), the University of California, Santa Cruz (1984), and the University of Munich (1987), as well as Visiting Senior Scientist appointments at the Lawrence Berkeley National Laboratory (1991) and the International School of Advanced Studies, Trieste, Italy (1997).  He is a member of the American Astronomical Society and the International Astronomical Union.  He received the Senior United States Scientist Award of the Alexander Humboldt Foundation, Germany (1988) and the Distinguished Alumnus Award of the Department of Astronomy, University of Maryland (2004).  He has published more than 300 refereed scientific papers.  At the University of Oklahoma, his research has concentrated on advancing our understanding of the physics of supernova explosions, with emphasis on the interpretation of the spectra of supernovae.  He was an early and persistent advocate of using supernovae to determine the history of the expansion rate of the universe.
J. Craig Wheeler received his PhD in physics from the University of Col
orado, Boulder, in 1969. He was a Postdoctoral Fellow at the California Institute of Technology from 1969 to 1971 and Assistant Professor of Astronomy at Harvard from 1971 to 1974. In 1974, he joined the University of Texas at Austin as Associate Professor of Astronomy. He became Full Professor in 1980, was appointed the Samuel T. and Fern Yanagisawa Regents Professor of Astronomy in 1985 and was Chair of the Department from 1986 to 1990. He has won a number of teaching awards, was appointed to the Academy of Distinguished Teachers in 2002, and received the state-wide Regents Award for Outstanding Teaching in 2010. He has published over 350 refereed scientific papers, a popular book on supernovae and gamma-ray bursts (Cosmic Catastrophes), two novels, and has edited six books. He was a Visiting Fellow at the Joint Institute for Laboratory Astrophysics (JILA) in 1979 and the Japan Society for the Promotion of Science in 1983, AURA/NOAO Visiting Professor in 1990, and a Fulbright Fellow in Italy in 1991. He is a long-time member of the Aspen Center for Physics and has done stints as Trustee there. He was a member of the Executive Committee of the Texas Symposium on Relativistic Astrophysics for twenty years. He has served on a number of agency advisory committees, including those for the National Science Foundation for which he chaired the Committee of Visitors of the Astronomy Division in 2005, the National Aeronautics and Space Administration for which he chaired the Senior Review of Operating Missions in 2010, and the National Research Council where he was Co-Chair of the Committee on the Origin and Evolution of Life from 2002 to 2005, a member of the Space Sciences Board from 2002 to 2006, a member of the Committee on Astronomy and Astrophysics from 2012 to 2015, and a member of the Committee on A Strategy to Optimize the U.S. Optical and Infrared System in the Era of the Large Synoptic Survey Telescope from 2014 to 2015. He has held many positions in the American Astronomical Society and was President of the Society from 2006 to 2008.  His research interests span all aspects of supernovae, both theory and observations, thermonuclear and core collapse.  He has also worked on closely related areas including late phases of stellar evolution, accretion disks, black holes, and astrobiology.

“This book aims to be a resource for those working in the field of supernovae … the text covers all the basics in fairly good depth, providing ample citations for readers wishing to delve deeper. … Summing Up: Recommended. Graduate students, researchers, faculty, and professionals.” (D. J. Van Domelen, Choice, Vol. 55 (10), June, 2018)
Buy options