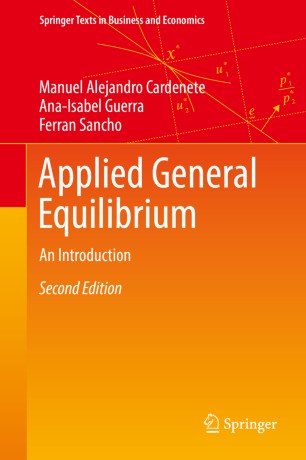 This advanced textbook provides a straightforward but comprehensive introduction to applied general equilibrium modeling. General equilibrium is the backbone of modern economic analysis, which is why generation after generation of economics students have been introduced to it. As an analytical tool, general equilibrium can provide one of the most complete views of a given economy, as it incorporates all economic agents (households, firms, government and the foreign sector) in an integrated way that explicitly reveals the interplay of economic forces—supply and demand—and the balancing role of prices.

Applied general equilibrium goes one step further in modeling, since it entails the integration of microeconomic theory, data handling and computing. This integration is essential for successful empirical modeling, but also involves various abilities that are not found in standard books. This book fills the gap, providing advanced students with the required tools, from the

construction of consistent and applicable general equilibrium models to the interpretation of the results that ensue from the adoption of policies. This second edition expands the range of topics covered, including: indispensable general equilibrium theory, step-by-step model design, incremental model extensions, a wealth of sample computer code, procedures for constructing economic databases, database adjustments and database updating algorithms, numerical model calibration, policy strategies and their trade-offs and welfare effects, and a discussion of empirical policy examples.

Manuel Alejandro Cardenete is Professor of Economics and Vice-rector of Postgraduate Studies at the Universidad Loyola Andalucía (ULA). He is an Associated Researcher at the Universidad Autonóma de Chile and Principal Researcher of HISPAREAL (Hispalis Regional Economics Applications Laboratory). He has co-authored several books including Designing Public Policies, Springer, 2010.  He has also published articles in scholarly journals such as Economic Modelling, European Planning Studies, Journal of Forecasting, Environment and Planning A, Regional Studies, Journal of Industrial Ecology and Economic Systems Research. He was Chair of the Department of Economics at ULA (2013-2016), Senior Economist in the European Commission (2011-2013), Professor at the Universidad Pablo de Olavide (2000-2013) and Visiting Researcher at the Regional Economics Applications Laboratory (REAL), University of Illinois at Urbana-Champaign (2002).

Energy Economics, Economic Modeling, Economic Systems Research and Energy Efficiency. She has visited other research centers and universities: the Fraser of Allander Institute, Strathclyde University, in Scotland in 2008, the Universidad Pablo de Olavide of Seville in 2010, the Edward J. Bloustein School of Planning and Public Policy, at Rutgers University, in 2011 and the University of Gröningen in 2014. She is currently collaborating with the supervision of end-of-master projects in the Official Master in Economics of the University of Granada in topics related to applied general equilibrium models and analysis.