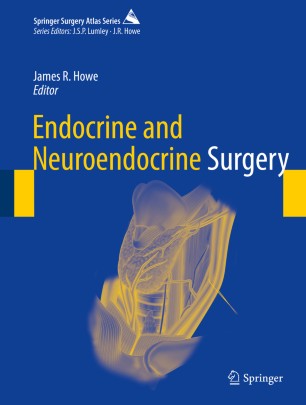 This book brings together recognized experts in the field to describe their current techniques for the surgical treatment of diseased thyroid, parathyroid, and adrenal glands, as well as neuroendocrine tumors of small bowel, pancreas, liver, and skin. For each procedure, indications, operative steps, potential pitfalls and complications, and postoperative management are presented. The clear descriptions coupled with informative and beautiful illustrations will give the reader new perspectives and insights into the anatomy and conduct of these procedures.

Endocrine surgery has been an area of special interest to surgeons for well over a century, while the increasing incidence of neuroendocrine tumors has more recently led to greater attention to these neoplasms. Significant advances have been made in a variety of areas, the most recent being the introduction of minimally invasive methods of removing diseased glands, and the improved understanding of the natural history of neuroendocrine tumors.

James R. Howe, MD, received his medical degree from University of Vermont College of Medicine in 1987, then did his General Surgical residency at Washington University from 1987-1994. In 1994 he became a fellow in General Surgical Oncology at Memorial Sloan-Kettering Cancer Center, New York, and he subsequently joined the University of Iowa College of Medicine, becoming Director of Endocrine Surgery in 2001 and Division Head of Surgical Oncology and Endocrine Surgery in 2002. Dr. Howe is currently Professor of Surgery at the College, a position held since 2005, and Director of the Division of Surgical Oncology and Endocrine Surgery. He has also served as Co-Leader of the Cancer Genetics and Computational Biology Program at the Holden Comprehensive Cancer Center (2005-7) and as Medical Director of the University of Iowa Tumor Registry (1996 to 2011). Dr. Howe is Co-Director of the Neuroendocrine Cancer Clinic at the University of Iowa. From 2005 to the present he has been acknowledged as one of America’s Top Doctors for Cancer (Castle Connolly Medical Ltd.), and since 2007 he has been included annually among America’s Top Surgeons (Consumer’s Research Council of America). He was a member of the editorial board of Annals of Surgical Oncology from 2007 to 2010 and Associate Editor of YearBook of Surgery since 2012. He is the author of over 100 papers in indexed journals as well as many book chapters.  He has also served on NIH study sections (serving as Chair of NCI-I from 2008-10) and currently is Principal Investigator on a subproject of the Iowa SPORE in Neuroendocrine Tumors.

“This book will be of use to students, residents, nonsurgeon physicians, and nurses. Anyone with an interest in caring for patients with endocrine and neuroendocrine tumors will find this a must read. … Among the available books … this one is among the best. It presents the material in a way that’s easy to follow and is a complete reference on the topic. It is both a great reference on the pathophysiology of the conditions and an atlas for surgeons.” (Steven K. Libutti, Doody’s Book Reviews, January, 2018)
Buy options