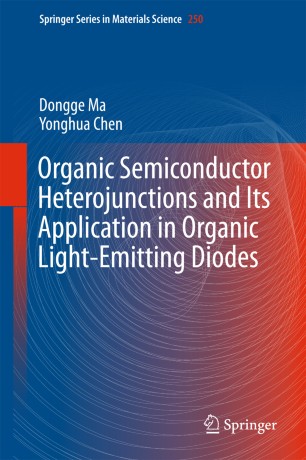 Organic Semiconductor Heterojunctions and Its Application in Organic Light-Emitting Diodes

This book systematically introduces the most important aspects of organic semiconductor heterojunctions, including the basic concepts and electrical properties. It comprehensively discusses the application of organic semiconductor heterojunctions as charge injectors and charge generation layers in organic light-emitting diodes (OLEDs). Semiconductor heterojunctions are the basis for constructing high-performance optoelectronic devices. In recent decades, organic semiconductors have been increasingly used to fabricate heterojunction devices, especially in OLEDs, and the subject has attracted a great deal of attention and evoked many new phenomena and interpretations in the field. This important application is based on the low dielectric constant of organic semiconductors and the weak non-covalent electronic interactions between them, which means that they easily form accumulation heterojunctions. As we know, the accumulation-type space charge region is highly conductive, which is an important property for highly efficient charge generation in their application as charge injector and charge generation layer in OLEDs. This book serves as a valuable reference for researchers and as a textbook for graduate students focusing on the study and development of OLED for display and lighting.

Prof. Dongge Ma studied semiconductor device physics at Liaoning University and Jilin University (China), where he received his BSc in 1989 and PhD in 1995, respectively. After additional years as a visiting professor and research fellow in Universidade Federal do Paranál, Brazil, and Durham University and St. Andrews University, UK, he joined Changchun Institute of Applied Chemistry, CAS, as a professor in 2001. Now he is a group leader of organic optoelectronic device physics in Research Center for Advanced Organic Optoelectronics, State Key of Polymer Physics and Chemistry. His research is focusing on the studies of organic optoelectronic devices, including white organic light-emitting diodes, organic photovoltaic cells and photodetectors and organic lasers, and the physics processes in organic semiconductors. Up to now, he has published over 200 papers on organic electronics, and the cited numbers in published papers are over 1000 times. He also has patents of over 30.
Dr Yonghua Chen received his BE degree in chemistry from Inner Mongolia University in 2006 and then joined Prof. Dongge Ma’s group at Changchun Institute of Applied Chemistry, Chinese Academy of Sciences (CAS), where he obtained his Ph.D. in polymer chemistry and physics in 2011. After two-year postdoctoral research at Wake Forest University working on alternating current-driven field-induced polymer electroluminescent devices, he currently is a postdoctoral research associate in Case Western Reserve
University focusing on the energy storage and conversion based on carbon materials. His research interests include organic light-emitting diodes and field-induced polymer electroluminescent devices for flat panel displays and solid state lighting, and polymer and perovskite solar cells and supercapacitors for energy storage and conversion. He is co-author of 30 scientific papers in international refereed journals and the cited numbers are over 400 times.
A list of selected pu
blications can be found in the attachment.