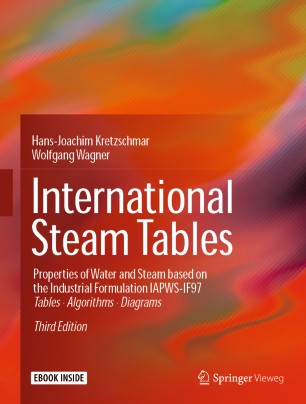 This book contains steam tables for practical industrial use calculated by using the international standard IAPWS-IF97 for the thermodynamic properties of water and steam and the IAPWS industrial standards for transport and other properties. The complete set of equations of IAPWS-IF97 is presented including all supplementary backward equations adopted by IAPWS for fast calculations of heat cycles, boilers, and steam turbines. The calculation of the properties is not only shown for the usual input parameter pairs pressure and temperature, but also for the parameters pressure and enthalpy, pressure and entropy, enthalpy and entropy. It is for the first time that such a description is given. For designing advanced energy conversion processes, tables and property calculation algorithms of steam up to 2000 °C are given.

In addition, these steam tables contain the following features:

• Formulas to calculate arbitrary partial derivatives of the eight most important properties from IAPWS-IF97, which are very helpful in non-stationary process modelling, are shown.

• The uncertainty values of IAPWS-IF97 regarding the most important properties are included.

• Pressure-temperature diagrams with isolines of 26 thermodynamic, transport and other properties are added.