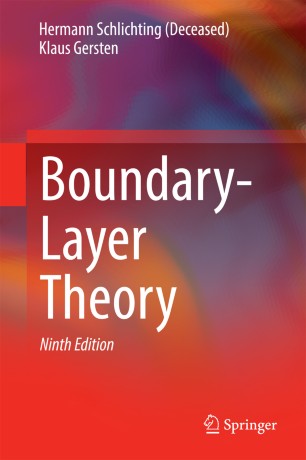 This new edition of the near-legendary textbook by Schlichting and revised by Gersten presents a comprehensive overview of boundary-layer theory and its application to all areas of fluid mechanics, with particular emphasis on the flow past bodies (e.g. aircraft aerodynamics). The new edition features an updated reference list and over 100 additional changes throughout the book, reflecting the latest advances on the subject.

Hermann Schlichting (1907 – 1982) was a German fluid mechanics scientist. He studied the mathematics, physics and applied mechanics at the University of Jena, Vienne and Göttingen and was promoted 1930. From 1931 to 1935 he worked at the Kaiser Wilhelm Institute for Flow Research in Göttingen. After a short period at Dornier in Friedrichshafen where he was responsible for the new wind tunnel he joined the Technische Universität Braunschweig in 1937 and became professor in 1938 at the age of 30. Herman Schlichting became an Emeritus Professor in 1975.

Klaus Gersten is a German mathematician, engineer and expert in fluid mechanics. He studied mathematics and physics at the Technical University Braunschweig from 1949 to 1953. In 1957 he completed his doctorate under supervision of Hermann Schlichting. He became head of the Department of Theoretical Aerodynamics and he was deputy director of the Institute of Aerodynamics of the German Research Institute for Aviation ( DFL ) in Braunschweig . After his habilitation in 1960, he was appointed in 1964 to the University of Bochum where he in the Institute of Thermodynamics and Fluid Dynamics until his retirement.