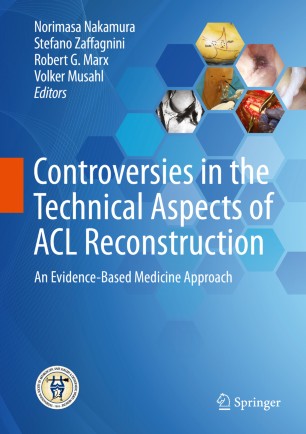 Controversies in the Technical Aspects of ACL Reconstruction

This book provides the reader with the best available evidence on the most pressing issues relating to reconstruction of the anterior cruciate ligament (ACL) with the goal of supporting surgical reconstruction of the ACL and improving outcomes for patients. Key topics for which evidence-based information is presented include selection of graft material and source, the use of different surgical techniques, graft rupture in relation to surgical technique, and progression to osteoarthritis. The book will aid the surgeon in making decisions with respect to fixation devices and tensioning, the bundles to be reconstructed, and whether to preserve remnants or partial bundle ruptures. An evidence-based stance is taken on evolving topics such as the anatomy of the tibial insertion site of the ACL and the role of the anterolateral capsule and posteromedial corner in high-grade rotatory instability. Furthermore, novel technical developments for measurement of knee laxity and soft tissue navigation are discussed. The reader will also find useful information on general issues concerning physical examination, arthroscopic setup, timing of reconstruction, anesthesia, and anticoagulation.

Norimasa Nakamura, MD, PhD is an orthopaedic surgeon and Professor at the Institute for Medical Science in Sports, Osaka Health Science University, Osaka City, Osaka, Japan. He is also Invited Professor at the Center for Advanced Medical Engineering and Informatics, Osaka University. Dr. Nakamura is a Fellow of the Royal College of Surgeons (FRCS) (England). He is Vice President of the International Cartilage Repair Society (ICRS) and chair of the Scientific Committee of International Society of Arthroscopy, Knee Surgery and Orthopaedic Sports Medicine (ISAKOS). He is a member of the editorial boards of Cartilage, the Journal of Experimental Orthopaedics, and the Journal of Orthopaedic Science. Dr. Nakamura is the author of more than 100 peer-reviewed papers.

Robert G. Marx, MS, MSc, is Attending Orthopedic Surgeon at the Hospital for Special Surgery, Weill Cornell Medical College, New York, NY, USA. He is Professor of Orthopedic Surgery and Professor of Public Health at Weill Cornell Medical College. He is a member of the Board of Directors of ISAKOS and has previously served as Chair of the ISAKOS Scientific Advisory Committee. Dr. Marx is the author of three books, including Revision ACL Reconstruction: Indications and Technique (Springer, New York, 2013) and over 170 peer-reviewed articles. He is Associate Editor for Evidence-Based Orthopedics, The Journal of Bone & Joint Surgery [American] and an editorial board member for Knee Surgery, Sports Traumatology, Arthroscopy.

Volker Musahl, MD, is Medical Director of the UPMC Center for Sports Medicine, University of Pittsburgh Medical Center, Pittsburgh, PA. He is Associate Professor of Orthopaedic Surgery (School of Medicine) and Associate Professor of Bioengineering (Swanson School of Engineering) at the University of Pittsburgh. Dr. Musahl’s research interests include knee and shoulder biomechanics. He has been the recipient of various awards, including the Cabaud Memorial Award for the best paper researching hard or soft tissue biology and the Aircast Award for Basic Science for collaborative work on ACL reconstruction. He is a member of the ESSKA Education Committee, the Anterior Cruciate Ligament Study Group program committee, the ISAKOS Scientific Committee (2013-2017), and the AOSSM research committee.

Stefano Zaffagnini, MD, is coordinator of the Sports Traumatology Excellence Centre of Istituti Ortopedici Rizzoli (Rizzoli Orthopaedic Institute), Bologna, Italy. He is Associate Professor of Orthopaedics and Traumatology in the Second Orthopedic Clinic at the Institute (University of Bologna). Dr. Zaffagnini is current President of the Italian Society for Surgery of the Knee (SIGASCOT) and a member of the ISAKOS Scientific Committee and the Anterior Cruciate Ligament Study Group. He is a member of the editorial boards of Knee Surgery, Sports Traumatology, Arthroscopy and Operative Techniques in Orthopaedics. Between 1991 and 2014 he published 169 articles in international journals and he has taken part as a speaker in more than 200 international meetings.