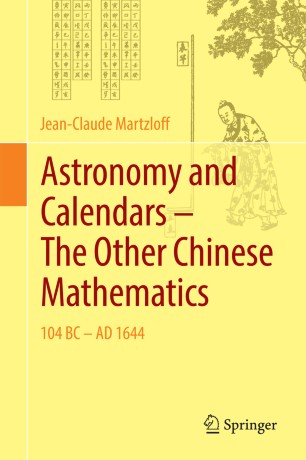 Astronomy and Calendars – The Other Chinese Mathematics

Presented from the viewpoint of the history of mathematics, this book explores both epistemological aspects of Chinese traditional mathematical astronomy and lunisolar calendrical calculations. The following issues are addressed: (1) connections with non-Chinese cultural areas; (2) the possibility or impossibility of using mathematics to predict astronomical phenomena, a question that was constantly raised by the Chinese from antiquity through medieval times; (3) the modes of representation of numbers, and in particular the zero, found in the context of Chinese calendrical calculations; and (4) a detailed analysis of lunisolar calendrical calculations. Fully worked-out examples and comparisons between the results of calculations and the content of Chinese historical calendars from various periods are provided.

Traditional Chinese calendrical and mathematical astronomy consists of permanently reformed mathematical procedures designed to predict, but not explain, phenomena pertaining to astronomy and related areas. Yet, despite appearances, models of the mathematical techniques hidden behind this voluminous corpus reveal that they depend on a limited number of clear-cut mathematical structures. Although only a small fraction of these techniques have been fully studied, what is known surprisingly broadens our knowledge of the history of Chinese mathematics.

From the reviews of the French edition:

This is a demanding, rigorous book to read … worth the concentrated study it requires. The rewards are not only in the details but in the general overview that …[it] provides.  Joseph Dauben, EASTM, 2011

...first Work in a Western language to turn to for anyone interested in the details of Chinese calendrical computations.  Benno Van Dalen, ISIS, 2011

Martzloff’s careful scholarship and his overall look at the calendar beyond astronomical calculations, …, make this book a most valuable contributions to a field of increasing interest. U. D’Ambrosio, Mathematical Reviews, 2013

Jean-Claude Martzloff is Honorary Director of Research at the French National Center for Scientific Research (Chinese studies). In 2009 he was awarded the Ikuo Hirayama prize by the Académie des Inscriptions et Belles-Lettres for his work on the history of Chinese mathematics. He is the author of A History of Chinese Mathematics (Springer, 2nd. Edition, 2006).

“Those who wish to thoroughly examine the topic will be delighted. As one might expect with this type of work, the bibliography is massive, and many footnotes provide sources and further information. Open problems are included. Summing Up: Recommended. Graduate students, faculty, and professionals.” (C. Bauer, Choice, Vol. 54 (9), May, 2017)
Buy options