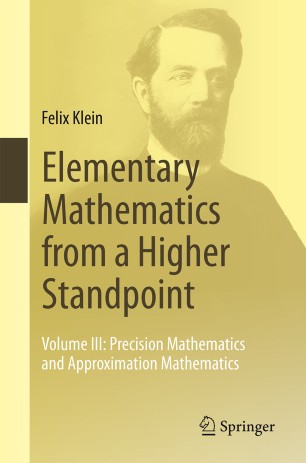 Elementary Mathematics from a Higher Standpoint

These three volumes constitute the first complete English translation of Felix Klein’s seminal series “Elementarmathematik vom höheren Standpunkte aus”. “Complete” has a twofold meaning here: First, there now exists a translation of volume III into English, while until today the only translation had been into Chinese. Second, the English versions of volume I and II had omitted several, even extended parts of the original, while we now present a complete revised translation into modern English.

The volumes, first published between 1902 and 1908, are lecture notes of courses that Klein offered to future mathematics teachers, realizing a new form of teacher training that remained valid and effective until today: Klein leads the students to gain a more comprehensive and methodological point of view on school mathematics. The volumes enable us to understand Klein’s far-reaching conception of elementarisation, of the “elementary from a higher standpoint”, in its implementation for school mathematics.

In Volume III, Klein explores the relationship between precision and approximation mathematics. He crosses the various fields of mathematics – from functions in one and two variables to practical geometry to space curves and surfaces – underlining the relation between the exactness of the idealised concepts and the approximations to be considered in applications. Logical procedures are confronted with the way in which concepts arise starting from observations. It is a comparison between properties pertaining only to the theoretical field of abstract mathematics and properties that can be grasped by intuition. The final part, which concerns gestalt relations of curves and surfaces, shows Klein to be the master of the art of description of geometric forms.

About the author:<
Felix Klein (1849-1925) was a leading German mathematician whose research interests included group theory, complex analysis, and geometry. His work influenced many areas of mathematics and related subjects, ranging from mathematical physics to mathematical didactics.
To this day, Felix Klein is considered one of the most important mathematicians of the 19th century.