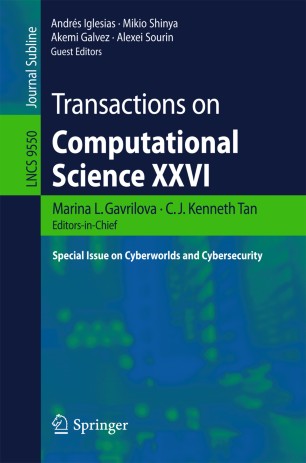 Special Issue on Cyberworlds and Cybersecurity

The LNCS journal Transactions on Computational Science reflects recent developments in the field of Computational Science, conceiving the field not as a mere ancillary science but rather as an innovative approach supporting many other scientific disciplines. The journal focuses on original high-quality research in the realm of computational science in parallel and distributed environments, encompassing the facilitating theoretical foundations and the applications of large-scale computations and massive data processing. It addresses researchers and practitioners in areas ranging from aerospace to biochemistry, from electronics to geosciences, from mathematics to software architecture, presenting verifiable computational methods, findings, and solutions, and enabling industrial users to apply techniques of leading-edge, large-scale, high performance computational methods.

This, the 26th issue of the Transactions on Computational Science journal, is comprised of ten extended versions of selected papers from the International Conference on Cyberworlds 2014, held in Santander, Spain, in June 2014. The topics covered include areas of virtual reality, games, social networks, haptic modeling, cybersecurity, and applications in education and arts.