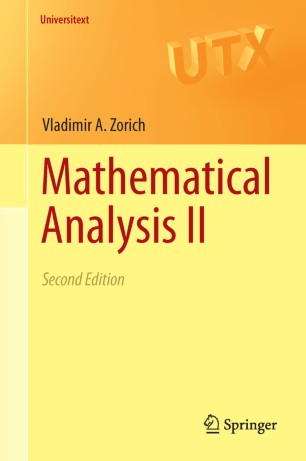 This second English edition of a very popular two-volume work presents a thorough first course in analysis, leading from real numbers to such advanced topics as differential forms on manifolds; asymptotic methods; Fourier, Laplace, and Legendre transforms; elliptic functions; and distributions. Especially notable in this course are the clearly expressed orientation toward the natural sciences and the informal exploration of the essence and the roots of the basic concepts and theorems of calculus. Clarity of exposition is matched by a wealth of instructive exercises, problems, and fresh applications to areas seldom touched on in textbooks on real analysis.

The main difference between the second and first English editions is the addition of a series of appendices to each volume. There are six of them in the first volume and five in the second. The subjects of these appendices are diverse. They are meant to be useful to both students (in mathematics and physics) and teachers, who may be motivated by different goals. Some of the appendices are surveys, both prospective and retrospective. The final survey establishes important conceptual connections between analysis and other parts of mathematics.

This second volume presents classical analysis in its current form as part of a unified mathematics. It shows how analysis interacts with other modern fields of mathematics such as algebra, differential geometry, differential equations, complex analysis, and functional analysis. This book provides a firm foundation for advanced work in any of these directions.

“The textbook of Zorich seems to me the most successful of the available comprehensive textbooks of analysis for mathematicians and physicists. It differs from the traditional exposition in two major ways: on the one hand in its closer relation to natural-science applications (primarily to physics and mechanics) and on the other hand in a greater-than-usual use of the ideas and methods of modern mathematics, that is, algebra, geometry, and topology. The course is unusually rich in ideas and shows clearly the power of the ideas and methods of modern mathematics in the study of particular problems. Especially unusual is the second volume, which includes vector analysis, the theory of differential forms on manifolds, an introduction to the theory of generalized functions and potential theory, Fourier series and the Fourier transform, and the elements of the theory of asymptotic expansions. At present such a way of structuring the course must be considered innovative. It was normal in the time of Goursat, but the tendency toward specialized courses, noticeable over the past half century, has emasculated the course of analysis, almost reducing it to mere logical justifications. The need to return to more substantive courses of analysis now seems obvious, especially in connection with the applied character of the future activity of the majority of students.

...In my opinion, this course is the best of the existing modern courses of analysis.”

From a review by V.I.Arnold

VLADIMIR A. ZORICH is professor of mathematics at Moscow State University. His areas of specialization are analysis, conformal geometry, quasiconformal mappings, and mathematical aspects of thermodynamics. He solved the problem of global homeomorphism for space quasiconformal mappings. He holds a patent in the technology of mechanical engineering, and he is also known by his book Mathematical Analysis of Problems in the Natural Sciences.