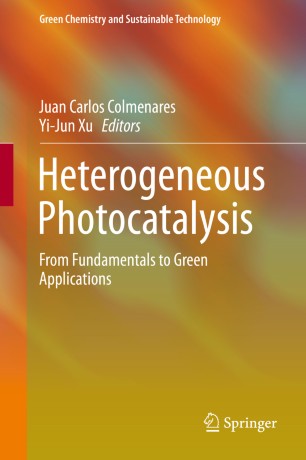 From Fundamentals to Green Applications

The book explains the principles and fundamentals of photocatalysis and highlights the current developments and future potential of the green-chemistry-oriented applications of various inorganic, organic, and hybrid photocatalysts. The book consists of eleven chapters, including the principles and fundamentals of heterogeneous photocatalysis; the mechanisms and dynamics of surface photocatalysis; research on TiO2-based composites with unique nanostructures; the latest developments and advances in exploiting photocatalyst alternatives to TiO2; and photocatalytic materials for applications other than the traditional degradation of pollutants, such as carbon dioxide reduction, water oxidation, a complete spectrum of selective organic transformations and water splitting by photocatalytic reduction. In addition, heterogeneized polyoxometalate materials for photocatalytic purposes and the proper design of photocatalytic reactors and modeling of light are also discussed.
This book appeals to a wide readership of the academic and industrial researchers and it can also be used in the classroom for undergraduate and graduate students focusing on heterogeneous photocatalysis, sustainable chemistry, energy conversion and storage, nanotechnology, chemical engineering, environmental protection, optoelectronics, sensors, and surface and interface scienc
e.
Juan Carlos Colmenares is a Professor at the Institute of Physical Chemistry, Polish Academy of Sciences, Poland.
Yi-Jun Xu is a Professor at the State Key Laboratory of Photocatalysis on Energy and Environment, College of Chemistry, Fuzhou University, China.

Prof. Juan Carlos Colmenares Q. was educated in Colombia through high school, and then moved to Poland in 1991. He graduated from Warsaw University of Technology (Chem.Eng.1995) and obtained his M.Sc. (1997) in Catalysis for Organic Technology and Ph.D. (2004) in Chemical and Material Sciences from the same university and the D.Sc. degree (2015, Habilitation) from the Institute of Physical Chemistry of the Polish Academy of Sciences in Warsaw, Poland. His interests range from materials science, nanotechnology and heterogeneous catalysis to biomass/CO2 valorisation, solar chemicals, sonication, photocatalysis and water/air purification. After obtaining his Ph.D., he worked at the University of Cordoba, Spain (2005-2006) in Prof. Marinas’s group as a post-doctoral fellow and at the University of Southern California, Los Angeles (USA) (2006-2009) in Prof. G.A. Olah (Nobel Prize in Chemistry) group as a post-doctoral research associate. He is a Marie Sklodowska-Curie Fellow. He is serving as an expert evaluator for many important scientific journals or institutions as well as a member of the Editorial Advisory Board of Sustainable Chemical Processes journal (Chemistry Central). He has co-authored more than 50 works in international scientific journals and books, and filed two patent applications.

Prof. Yi-Jun Xu received his Ph.D. in heterogeneous catalysis at the School of Chemistry, Cardiff University,

UK in 2006 with Prof. Graham J. Hutchings (FLSW FRS). From 2007 to 2009, he worked as a postdoctoral fellow at the Fritz Haber Institute (FHI) of the Max Planck Society, Berlin, Germany. After that, he joined the faculty as a Minjiang Scholar Professor at the State Key Laboratory of Photocatalysis on Energy and Environment, College of Chemistry, Fuzhou University, P.R. China. His current research interests are mainly focused on synthesizing nanostructured materials, including graphene-based composites, core-shell nanostructured materials, one-dimensional composites and defective semiconductors, and exploring their various applications in the area of heterogeneous photocatalysis. He is a Fellow of Royal Society of Chemistry (FRSC). He is selected in the top 1% of highly cited authors in Royal Society of Chemistry journals in 2014 and selected in the 2014 China highly cited scholars list of SCOPUS Database. He has published more than 120 works in international scientific journals and books, which include 6 ESI 0.1% hot papers, 34 ESI highly cited papers and 13 papers highlighted as the cover art of different journals. He is serving as an expert evaluator for many important scientific journals.