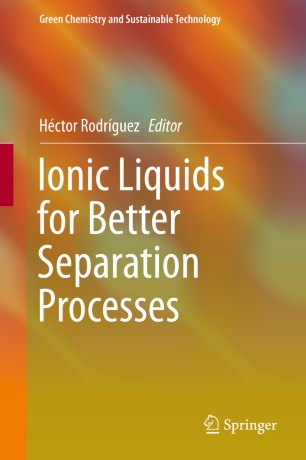 This book discusses capital separation processes of industrial interest and explores the potential for substantial improvement offered by a promising class of substances: ionic liquids. These low melting point salts, with their unique characteristics, have been gaining relevance in the field of separation through a variety of approaches. The chapters are structured from an application perspective, and cover the utilisation of ionic liquids in different unit operation contexts (distillation, liquid-liquid extraction, and solid-liquid extraction), giving an idea of their remarkable versatility. The final chapters focus on the use of ionic liquids in analytical applications based on separation procedures.

This volume combines the review of the main advances to date with the analysis of the potential future use of ionic liquids in separation processes across a variety of fields, ranging from enhancement of state-of-the-art technologies to a revolution in the technological bases currently in use. It provides a valuable resource for engineers and scientists working in the field of separation, as well as for all readers generally interested in ionic liquids, in particular from an application standpoint.

Héctor Rodríguez is a faculty member of the Department of Chemical Engineering at the University of Santiago de Compostela, Spain.

“The chapters provide a good balance of examples where ILs have made valuable contributions to separations as well as discussing their limitations. Several of the chapters also provide an outlook into areas where ILs will continue to be useful in a broad range of applications. … this is a very good book that I highly recommend for readers wishing to understand how the versatility of ILs can be exploited in a broad range of separation processes.” (Jared L. Anderson, Analytical and Bioanalytical Chemistry, Vol. 408, 2016)