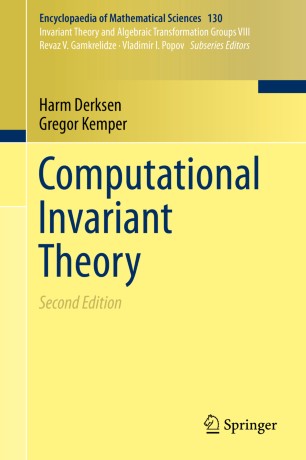 Part of the Encyclopaedia of Mathematical Sciences book series (EMS)

This book is about the computational aspects of invariant theory. Of central interest is the question how the  invariant ring of a given group action can be calculated. Algorithms for this purpose form the main pillars around which the book is built. There are two introductory chapters, one on Gröbner basis methods and one on the basic concepts of invariant theory, which prepare the ground for the algorithms. Then algorithms for computing invariants of finite and reductive groups are discussed. Particular emphasis lies on interrelations between structural properties of invariant rings and computational methods. Finally, the book contains a chapter on applications of invariant theory, covering fields as disparate as graph theory, coding theory, dynamical systems, and computer vision.

The book is intended for postgraduate students as well as researchers in geometry, computer algebra, and, of course, invariant theory. The text is enriched with numerous explicit examples which illustrate the theory and should be of more than passing interest.

More than ten years after the first publication of the book, the second edition now provides a major update and covers many recent developments in the field. Among the roughly 100 added pages there are two appendices, authored by Vladimir Popov, and an addendum by Norbert A'Campo and Vladimir Popov.

“If I want to understand something about invariants of finite groups, this is the book that I will go to, as I already have. … Overall this is an excellent book.” (Thomas Garrity, Mathematical Reviews, November, 2016)

“The book under review is devoted to the constructive, algorithmic, approach to invariant theory. … The contents of the book under review can be divided in three parts. … it is so well structured that can be read by anyone with a basic background on algebraic groups.” (Felipe Zaldivar, MAA Reviews, maa.org, March, 2016)

“This encyclopedic treatise gives a very comprehensive and lucid overview of the state of art in computational invariant theory and its applications, including numerous recent topics and results, and therefore it may serve as a highly useful source for advanced students and researchers in commutative algebra, algebraic geometry, computer algebra, group theory, discrete mathematics, information theory, computer science, and related fields of science.” (Werner Kleinert, zbMATH 1332.13001, 2016)
Buy options