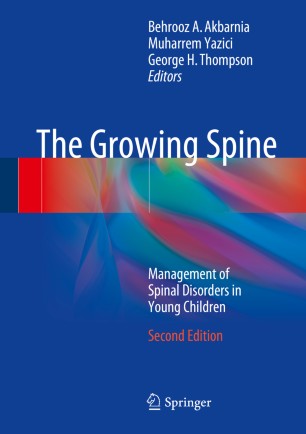 The second edition of The Growing Spine has been extensively revised to cover recent advances in knowledge and management, as documented in the significant body of literature published since the first edition. The book will serve as a comprehensive, one-stop reference for specialists and health professionals who care for young children with spinal deformities. In addition, it will effectively help to standardize the care of these patients.

While important progress has been achieved in the field of spinal disorders in very young children over the past two decades, the treatment of such conditions remains challenging owing to the age of the patients, the varying etiologies, and the progressive nature of the deformities. There also may be associated issues such as congenital anomalies, respiratory insufficiency, and neurologic problems. Depending on the etiology of the deformity, these children are often cared for by multiple specialists including pediatricians, pediatric orthopaedists or orthopaedic spine surgeons, neurologists, pediatric surgeons, pediatric neurosurgeons, oncologists, and pulmonologists.

The multidisciplinary nature of care is reflected in The Growing Spine, which will be of value for all involved practitioners rather than just orthopaedic specialists. It will also be an ideal reference for nurses, physical therapists, and healthcare professionals in training, who are usually unfamiliar with spinal deformities in children.

Behrooz A. Akbarnia, MD, is Clinical Professor in the Department of Orthopaedic Surgery at the University of California, San Diego and Medical Director of the San Diego Center for Spinal Disorders, La Jolla, California, a position he has held since 1990. In addition he is Director Emeritus of the San Diego Spine Fellowship Program and was previously a Fellowship Director of the program. Dr. Akbarnia has had a long and distinguished career, during which he has also served as Professor of Orthopaedic Surgery and Professor of Pediatrics and Adolescent Medicine at St. Louis University. He has received various awards, including a Lifetime Service Award from the Western Orthopaedic Association, the Walter P. Blount Humanitarian Award from the Scoliosis Research Society, and Orthopaedic Educational Achievement Awards from the American Academy of Orthopaedic Surgeons. He has been President and Founder of the San Diego Spine Foundation and the Growing Spine Foundation and in 2005-6 was President of the Scoliosis Research Society. Dr. Akbarnia has served on various journal editorial boards and is the author of 100 papers in refereed journals.

Muharrem Yazici is Professor of Orthopaedic Surgery at Hacettepe University Faculty of Medicine, Ankara, Turkey, having been appointed to this position in 2003. He has held numerous positions in medical societies, including as President of the Turkish Society of Pediatric Orthopaedics, President of the European Paediatric Orthopaedic Society, and member of the Board of Directors of the Scoliosis Research Society. Since 2005 he has been an Executive Committee Member of the Growing Spine Study Group. His awards include the 2001 Professor Rıdvan Ege Scientific Research Award from the Turkish Society of Orthopaedics and Traumatology and 2005 The Scientific and Technological Research Council of Turkey Junior Science Award. Dr. Yazici is an editorial board member for the Journal of Children’s Orthopaedics and the Journal of Spinal Deformity and has been Deputy Editor of Acta Ortopaedica et Traumatologica Turcica. He is the author of 100 articles in peer-reviewed journals and editor of the previous Springer book, Non-idiopathic Spine Deformities in Young Children.

George H. Thompson, MD, is Professor of Orthopaedic Surgery and Pediatrics, Case Western Reserve University, Cleveland, Ohio (appointed 1993) and Director of Pediatric Orthopaedic Surgery at Rainbow Babies and Children’s Hospital, University Hospitals Case Medical Center since 1987. He has served on many national committees and held various elected offices in professional societies, including as Chair of the Scientific Committee of the International Federation of Pediatric Orthopaedic Societies and the Shriner’s Medical Advisory Board. He was President of the Ohio Orthopaedic Society (1997-1999), Pediatric Orthopaedic Society of North America (POSNA, 2002-2003) and the Scoliosis Research Society (SRS, 2006-2008). Since 2010 he has been CEO and President of the Société Internationale de Chirugie Orthopédique et de Traumatologie (SICOT) Foundation. In 2013 Dr. Thompson received a Lifetime Achievement Award from the SRS and he has previously been the recipient of the Arthur H. Huene Memorial Award from POSNA/St. Giles Foundation (2008). He has served on a number of journal editorial boards and is a past Associate and Deputy Editor of Pediatric Orthopaedics for the Journal of Bone and Joint Surgery [Am]. Dr. Thompson is currently co-editor of the Journal of Pediatric Orthopaedics.  He is the author of more than 150 articles in peer-reviewed journals, 90 textbook chapters and has edited 4 textbooks.