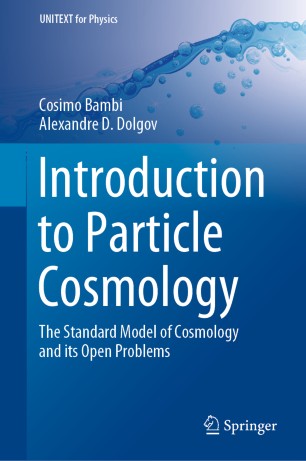 The Standard Model of Cosmology and its Open Problems

This book introduces the basic concepts of particle cosmology and covers all the main aspects of the Big Bang Model (expansion of the Universe, Big Bang Nucleosynthesis, Cosmic Microwave Background, large scale structures) and the search for new physics (inflation, baryogenesis, dark matter, dark energy). It also includes the majority of recent discoveries, such as the precise determination of cosmological parameters using experiments like WMAP and Planck, the discovery of the Higgs boson at LHC, the non-discovery to date of supersymmetric particles, and the search for the imprint of gravitational waves on the CMB polarization by Planck and BICEP.

This textbook is based on the authors’ courses on Cosmology, and aims at introducing Particle Cosmology to senior undergraduate and graduate students. It has been especially written to be accessible even for those students who do not have a strong background in General Relativity and quantum field theory. The content of this book is organized in an easy-to-use style and students will find it a helpful research guide.

Cosimo Bambi is Professor at the Department of Physics of Fudan University. He received the PhD from Ferrara University (Italy) in 2007. He was a postdoc at Wayne State University (Michigan), at IPMU at The University of Tokyo (Japan), in the group of Prof. Dvali at LMU Munich (Germany). He moved to Fudan University at the end of 2012 under the Thousand Young Talents Program. His research interests cover several areas in gravity, cosmology, and high energy astrophysics. He has published over 80 research papers in refereed journals and 2 review papers.

DOLGOV Alexandre Dmitrievich is a professor at Universita di Ferrara, Dipartimento di Fisica, Italy; ITEP, Moscow, Russia; and Novosibirsk State University, Novosibirsk, Russia. He got his PhD (Candidate of Science in Russia) in 1969. He won Lenin Komsomol Award in 1973, Landau-Weizmann Award for theoretical physics in1996, Pontecorvo Prize by JINR in 2009, Friedmann Prize by Russian Academy of sciences in 2011. His publications include more than 250 titles in English and Russian with an overall number of citations about 6500. Among them there are several review papers published in Reviews of Modern Physics, Physics Reports, Sov. Phys. Uspekhi, Surveys in High Energy Physics, and books "Kosmologiya Rannei Vselennoi" ("Cosmology of the early Universe"), MGU Publishers, Moscow, 1988 and "Basics of Modern Cosmology", Edition Frontier, Paris, 1990.2

“This book describes the so-called Standard Cosmological Model. … The present book is intended for senior undergraduate and graduate physics students interested in cosmology. It is not necessary that they possess a strong background in theoretical high energy physics.” (Claudia-Veronika Meister, zbMATH 1334.85001, 2016)