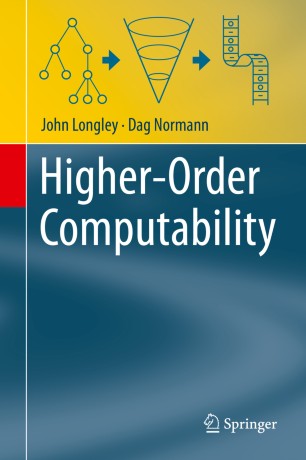 This book offers a self-contained exposition of the theory of computability in a higher-order context, where 'computable operations' may themselves be passed as arguments to other computable operations. The subject originated in the 1950s with the work of Kleene, Kreisel and others, and has since expanded in many different directions under the influence of workers from both mathematical logic and computer science. The ideas of higher-order computability have proved valuable both for elucidating the constructive content of logical systems, and for investigating the expressive power of various higher-order programming languages.

In contrast to the well-known situation for first-order functions, it turns out that at higher types there are several different notions of computability competing for our attention, and each of these has given rise to its own strand of research. In this book, the authors offer an integrated treatment that draws together many of these strands within a unifying framework, revealing not only the range of possible computability concepts but the relationships between them.

The book will serve as an ideal introduction to the field for beginning graduate students, as well as a reference for advanced researchers.

“This book is a true tour de force. The content is both mathematics and computer science; it is simultaneously an introductory textbook for students, a tutorial for seasoned researchers, a reference work, and a research monograph; ... The references to the literature are thorough. The writing is technical mathematics, and is good by that standard: there is ample intuitive explanation, and it is overall readable.” (Robert S. Lubarsky, Mathematical Reviews, April 2018)
Buy options