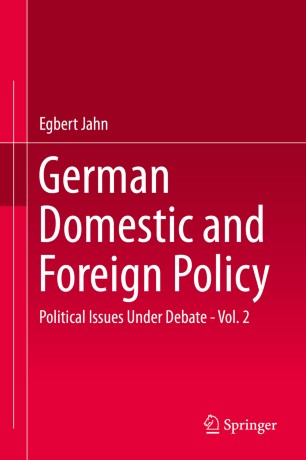 This volume analyses current German domestic and foreign policy debates of international relevance. By reflecting their contemporary historical background and discussing the logic behind the different positions in a dispute, the author considers issues such as whether Muslim women should be allowed to wear headscarves, fears about immigration, the predominance of either a single national culture or multicultural pluralism and the admissibility of multiple citizenship. This book also sheds new light on the debate over the boundaries of freedom of expression, which was triggered by the so-called Danish “Mohammad cartoons.” Aspects of German foreign policy are addressed, including the debate on the ratification of a European constitutional treaty and of the Treaty of Lisbon, German attempts to obtain a permanent seat on the Security Council, as well as the question of whether the deployment of the German army in Afghanistan contributed to the defense of Germany. This book is of interest to students and scholars of political sciences, as well as to journalists and practitioners interested in an analysis of current political debates in Germany.