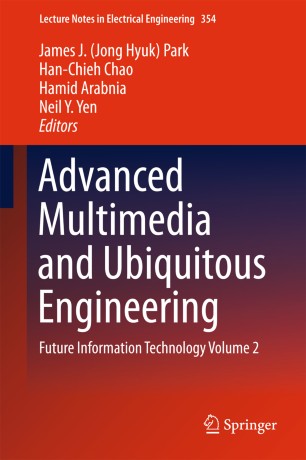 Representing the combined proceedings of the 9th International Conference on Multimedia and Ubiquitous Engineering (MUE-15) and the 10th International Conference on Future Information Technology (FutureTech 2015), this book aims to provide a complete coverage of the areas outlined and to bring together researchers from academic and industry and other practitioners to share their research ideas, challenges, and solutions.

Professor James J. (Jong Hyuk) Park received his Ph.D. degree in Graduate School of Information Security from Korea University, Korea. From December, 2002 to July, 2007, Dr. Park had been a research scientist of R&D Institute, Hanwha S&C Co., Ltd., Korea. From September, 2007 to August, 2009, He had been a professor at the Department of Computer Science and Engineering, Kyungnam University, Korea.

Professor Hamid R. Arabnia received a Ph.D. degree in Computer Science from the University of Kent (Canterbury, England) in 1987. Arabnia is currently a Professor of Computer Science at University of Georgia (Georgia, USA), where he has been since October 1987. His research interests include Parallel and distributed processing techniques and algorithms, supercomputing, Big Data Analytics and applications in medical imaging, knowledge engineering, security and surveillance systems and other computational intensive problems.

Professor Neil Y. Yen received doctorates in Human Sciences at Waseda University, Japan, and in Engineering at Tamkang University, Taiwan in 2012. His doctorate in Waseda University was funded by the JSPS (Japan Society for the Promotion of Science) under RONPAKU program. He joins The University of Aizu, Japan as an associate professor since April 2012.