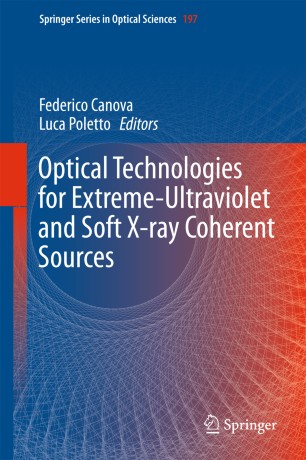 The book reviews the most recent achievements in optical technologies for XUV and X-ray coherent sources. Particular attention is given to free-electron-laser facilities, but also to other sources available at present, such as synchrotrons, high-order laser harmonics and X-ray lasers. The optical technologies relevant to each type of source are discussed. In addition, the main technologies used for photon handling and conditioning, namely multilayer mirrors, adaptive optics, crystals and gratings are explained.

Experiments using coherent light received during the last decades a lot of attention for the X-ray regime. Strong efforts were taken for the realization of almost fully coherent sources, e.g. the free-electron lasers, both as independent sources in the femtosecond and attosecond regimes and as seeding sources for free-electron-lasers and X-ray gas lasers. In parallel to the development of sources, optical technologies for photon handling and conditioning of such coherent and intense X-ray beams advanced. New problems were faced for the realization of optical components of beamlines demanding to manage coherent X-ray photons, e.g. the preservation of coherence and time structure of ultrashort pulses.