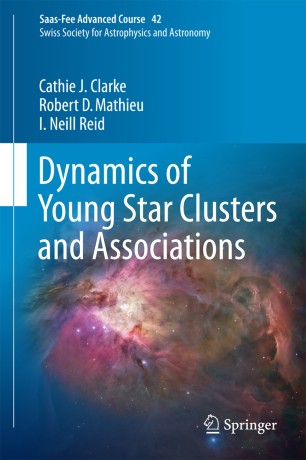 Where do most stars (and the planetary systems that surround them) in the Milky Way form? What determines whether a young star cluster remains bound (such as an open or globular cluster), or disperses to join the field stars in the disc of the Galaxy? These questions not only impact understanding of the origins of stars and planetary systems like our own (and the potential for life to emerge that they represent), but also galaxy formation and evolution, and ultimately the story of star formation over cosmic time in the Universe.

This volume will help readers understand our current views concerning the answers to these questions as well as frame new questions that will be answered by the European Space Agency's Gaia satellite that was launched in late 2013. The book contains the elaborated notes of lectures given at the 42nd Saas-Fee Advanced Course “Dynamics of Young Star Clusters & Associations" by Cathie Clarke (University of Cambridge) who presents the theory of star formation and dynamical evolution of stellar systems, Robert Mathieu (University of Wisconsin) who discusses the kinematics of star cluster

s and associations, and I. Neill Reid (Space Telescope Science Institute) who provides an overview of the stellar populations in the Milky Way and speculates on from whence came the Sun. As part of the Saas-Fee Advanced Course Series, the book offers an in-depth introduction to the field serving as a starting point for Ph.D. research and as a reference work for professional astrophysicists.

Cathie J Clarke is professor for astronomy at the Institute of Astronomy of the University of Cambridge. Her research focuses on star formation and exoplanets.

Robert Mathieu, has been on the faculty of the Department of Astronomy of the University of Wisconsin-Madison since 1987 and department chair since 2008. His research interests are:
Structure, kinematics and dynamics of star clusters and star-forming regions; stellar binary populations; blue stragglers and other objects at the interface of stellar evolution and stellar dynamics; formation of binary stars; stellar angular momentum evolution.

“This book covers the dynamics of young stellar systems. … this is both a good introduction to the field, and a useful reference for those who already work in the area. … This is a great book for both observers and theorists in any area around star formation, star clusters/associations, and galactic dynamics – especially timely with Gaia data arriving soon. I gave it to my PhD students with the instruction ‘read this from cover to cover – it’s really useful’.” (Simon Goodwin, The Observatory, Vol. 136 (1255), December, 2016)