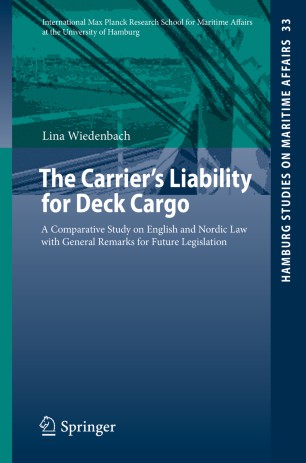 The Carrier's Liability for Deck Cargo

This book deals with the carrier’s liability for deck cargo in the Nordic countries and England as state parties of the Hague-Visby Rules. The comparative method serves to illustrate two widely differing methods of dealing with, first, the exclusion of certain deck cargo from the scope of the Hague-Visby Rules and, second, where not excluded, the Rules failure to include a special deck cargo liability regime. Various solutions similar to the English or Nordic approach, or a combination of the two, have also been adopted in a large number of other jurisdictions. Taking into consideration the massive quantities of cargo that are carried on deck today, the subject is more topical than ever.

The complexity of the problem stems from the way in which the deck has, over the years, gradually become a common place to stow cargo. When the Hague Rules were introduced in 1924, deck stowage was an absolute exception due to the great risks involved. As such, the topic must first be looked at in the context of the shipping realities in which the Hague Rules were drafted and then in terms of today’s shipping realities. The comparative analysis leading up to the author’s conclusions and general remarks for future legislation consists of two parts, the first dealing with the situations in which the carrier is permitted to stow cargo on deck, and the second with the carrier’s liability for deck cargo where he has stowed cargo on deck with, or as the case may be, without such permission.