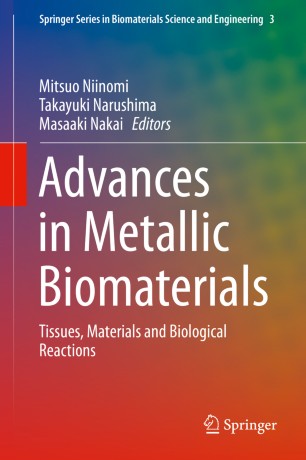 This book reviews fundamental advances in the use of metallic biomaterials to reconstruct hard tissues and blood vessels. It also covers the latest advances in representative metallic biomaterials, such as stainless steels, Co-Cr alloys, titanium and its alloys, zirconium, tantalum and niobium based alloys. In addition, the latest findings on corrosion, cytotoxic and allergic problems caused by metallic biomaterials are introduced. The book offers a valuable reference source for researchers, graduate students and clinicians working in the fields of materials, surgery, dentistry, and mechanics.

Mitsuo Niinomi, PhD, D.D.Sc., is a Professor at the Institute for Materials Research, Tohoku University, Japan

Takayuki Narushima, PhD, is a Professor at the Department of Materials Processing, Tohoku University, Japan

Masaaki Nakai, PhD, is an Associate Professor at the Institute for Materials Research, Tohoku University, Japan

Prof. Mitsuo Niinomi earned his Ph.D. degree from the Department of Metallurgical Engineering, and Steel and Iron Engineering, Nagoya University in 1980, and his D.D.Sc. from the Department of Dentistry, Aichi-Gakuin University in 2003. From 1980 to 2005, he was a Research Associate, Associate Professor, and Professor at Toyohashi University of Technology. In 2005, he moved to the Institute for Materials Research, Tohoku University as a Professor, and he was elected as the director of this institute in 2009. He was a visiting Associate Professor at Carnegie-Mellon University (USA) from July 1988 to June 1989, a visiting Professor at The University of Dayton (USA) and a foreign researcher at Wright Patterson Air Force Base, US Air Force from July 1997 to December 1997. He was appointed as an honorary Professor of Tianjin University, China from 2011, and a visiting Professor of Northeastern University, China from 2010-2015. He has been working in the area of fracture and microstructure relations of materials with a focus on titanium alloys for structural and biomedical applications. His recent research focuses on the design, development, and evaluation of biological and mechanical biocompatibility of titanium alloys for medical and dental applications.

Prof. Takayuki Narushima received his B.S., M.S., and Ph.D. degrees in Engineering from Tohoku University, Japan, in 1985, 1987, and 1994, respectively. He joined the Department of Metallurgy at Tohoku University as a Research Associate from 1987 to 1994 and as an Associate Professor from 1994 to 2004. He was a Professor in the Tohoku University Biomedical Engineering Research Organization (TUBERO) and has been a Professor at the Department of Materials Processing at Tohoku University since 2007. From 1998 to 1999, he was a Research Fellow at the University of California, Berkeley (Monbusyo Fellowship Program). His current research interests include precipitation control in biomedical Co-Cr alloys and Ni-Ti alloys, calcium phosphate coating on titanium, photocatalytic activity of oxide layers on titanium, and in vivo reactions of metallic materials.