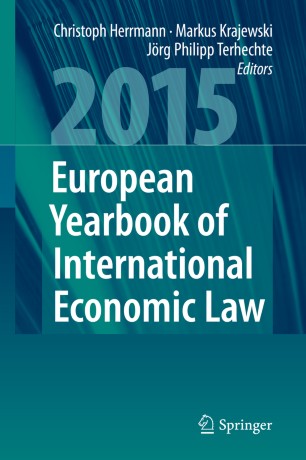 This sixth volume (2015) of the European Yearbook of International Economic Law puts a particular emphasis on non-tariff barriers (NTBs) to trade and the world trade order. With the steady reduction of tariff rates since the GATT 47 came into force, focus in recent years has been on the vast and complex landscape of non-tariff barriers to trade. States as well as scholars seemingly struggle with the multitude of measures pooled under this expression as there is no single, acknowledged definition of the term, and its relation to the term “non-tariff measures” remains equally blurred. Particularly in practice and on a multilateral level, there appears to be some awkwardness when it comes to coping with NTBs since multilateral trade rules seem to be in conflict with national regulatory autonomy in the pursuit of policy objectives. In part one, this volume sheds light on the problems of non-tariff barriers to trade that arise in various fields.

Part two focuses on regional integration with an emphasis on relations between East Asia and the European Union. In this regard, the authors outline the trade and investment relations between the European Union and East Asia, including Japan, Korea and Singapore. Part three offers an overview of recent institutional developments in WIPO, ICSID, WTO and WTO jurisprudence. Part four includes book reviews of recent works in the field of international economic law, and part five introduces a new section on publications in the field of international economic law that were released in 2013 and 2014.