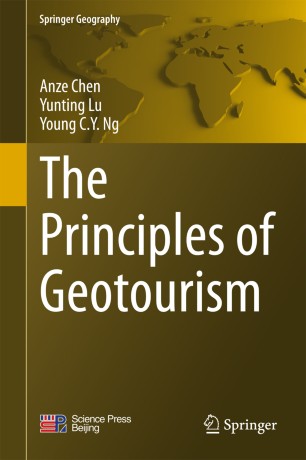 The Principles of Geotourism

The book introduces tourism earth-science as a new scientific discipline by applying the principles of earth-science in the study of natural and human tourism resources. It involves studying the geo-scientific characteristics of these tourism resources through surveys, evaluation and aesthetic value assessment. It also discusses about the principles behind geopark establishment and management. It is an important publication providing direction for geopark and tourism developments in China. The book is a tool for geological heritage survey, assessment and research. It can also be used to assist planning of geopark, national parks, heritage protection and scientific interpretation. It is a valuable teaching material for teachers and students of geoscience and tourism as well as providing useful guidance for geopark managers and tour guides in their operation. In addition, the book also offers scientific knowledge of the surrounding natural and cultural landscapes to the public and the general visitors.

Professor Anze Chen, a research fellow of the Chinese Academy of Geological Sciences, was engaged in the research of minerals and rocks in his early years. His book “Atlas of Igneous Rock Structure”, had been awarded a second prize of scientific and technological achievements by the Ministry of Geology and Mineral Resources. Since 1980, he has introduced earth-science into the tourism services, creating a new discipline of tourism and has written many related books including “An Introduction to Tourism Earthscience”, “Karst Stone Forest Landscape in China”, “Landscapes of Huangshan Granite”, “Introduction to Geoparks in China” etc. In recent years, he has been an editor of a number of books such as “A Grand Tourism Earthscience Dictionary”, “China National Geoparks Series” (a total of 30 volumes) and “Tourism Earthscience Proceedings” (a total of 20 volumes). He participated three times in the International Geological Congress (IGC) of 1989, 1996, and 2000 and was the chairman of the Field Trips Committee of the 30th IGC. He had also participated in two global geoparks conferences in 2004 and 2010, three times in the “World Chinese Conference on Geological Sciences” and had chaired twenty-nine times in the annual meeting of the China Tourism Earth-science and Geoparks between1985 to 2014. He is an advisor and consultant on landscape architecture of the Ministry of Construction, as well as an assessor of the Chinese National Geoparks of the Ministry of Land and Resources. He has been accredited as a Distinguished Researcher by the Tourism Research Centre of the Chinese Academy of Social Sciences.  Professor Chen is a visiting professor of the Beijing Tourism College, Fujian Normal University and Guizhou Normal University. He has also delivered lectures on   tourism and geoparks to more than 30 universities within China. These include Peking University, Tsinghua University, Taiwan University, Chinese University of Hong Kong, China Cultural University etc. He is an adviser of many Chinese geoparks and has been named as the father of Chinese geoparks by Professor Wolfgang Eder, the former chief of the UNESCO’s Earth-science Division.  Professor Anze Chen has significant contribution to the establishment, development and promotion of geoparks both in China and around the world.

“Every chapter provides a critical review of its related literature as well as several examples to illustrate the practical implications of its arguments. … this is an easy-to-read book that provides a rich set of both theoretical background and practical examples on the various resources and development plans and strategies of tourism earth science. … The book constitutes a very useful reading for researchers-academics, students, professionals and policy makers involved and interested in geotourism.” (Marianna Sigala, Information Technology & Tourism, Vol. 16, 2016)
Buy options