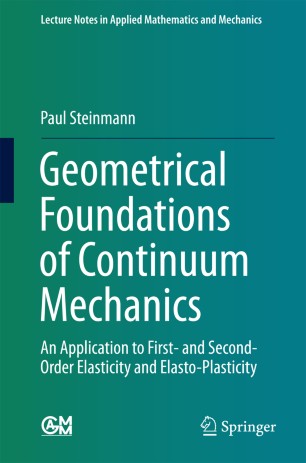 An Application to First- and Second-Order Elasticity and Elasto-Plasticity

generalized continuum mechanics in differential geometry. Besides applications to first-

order elasticity and elasto-plasticity an appreciation thereof is particularly illuminating

for what follows, such as connection, parallel transport, torsion, curvature, and metric

for holonomic and anholonomic coordinate transformations are reiterated in Part II.

Then, in Part III, the kinematics of geometrically nonlinear continuum mechanics

are considered. There various concepts of differential geometry, in particular aspects

related to compatibility, are generically applied to the kinematics of first- and second-

order geometrically nonlinear continuum mechanics. Together with the discussion on

the integrability conditions for the distortions and double-distortions, the concepts

of dislocation, disclination and point-defect density tensors are introduced. For

concreteness, after touching on nonlinear fir

st- and second-order elasticity, a detailed

is given. The discussion naturally culminates in a comprehensive set of different types

of dislocation, disclination and point-defect density tensors. It is argued, that these

above findings on integrability whereby distinction is made between the straightforward

engineering and the sciences alike, whereby a sound knowledge of tensor calculus and

continuum mechanics is required as a prerequisite.

“This new, comprehensive book by P. Steinmann consists of three main parts. … This book is of very high rigor, scope, and quality, written by an expert in the field, and is thus strongly recommended as a reference for scholars and advanced graduate students. It could also possibly serve as a textbook or supplementary reference for graduate or professional level course(s).” (John D. Clayton, Mathematical Reviews, August, 2015)