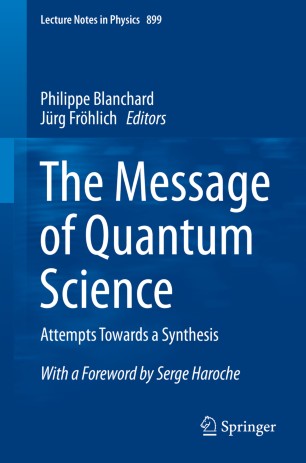 The Message of Quantum Science

Attempts Towards a Synthesis

This collection of essays is above all intended to pay tribute to the fact that while QM today is a refined and incredibly successful instrument, many issues concerning the internal consistency and the interpretation of this theory are still not nearly as well understood as they ought to be.

In addition, whenever possible these essays take the opportunity to link foundational issues to the many exciting developments that are often linked to major experimental and technological breakthroughs in exploiting the electromagnetic field and, in particular, its quantum properties and its interactions with matter, as well as to advances in solid state physics (such as new quantum Hall liquids, topological insulators and graphene). The present volume also focuses on various areas, including new interference experiments with very large molecules passing through double-slits, which test the validity of the Kochen-Specker theorem; new tests of the violation of Bell’s inequalities and the consequences of entanglement; new non-demolition measurements and tests of “wave-function collapse” to name but a few.

These experimental developments have raised many challenging questions for theorists, leading to a new surge of interest in the foundations of QM, which have puzzled physicists ever since this theory was pioneered almost ninety years ago.

The outcome of a seminar program of the same name on foundational issues in quantum physics (QM), organized by the editors of this book, and addressing newcomers to the field and more seasoned specialists alike, this volume provides a pedagogically inspired snapshot view of many of the unresolved issues in the field of foundational QM.