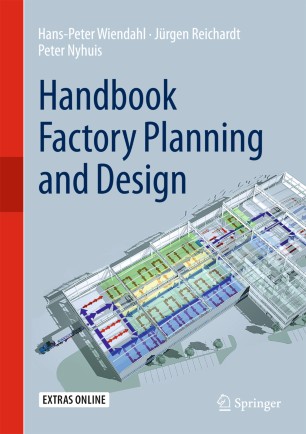 This handbook introduces a methodical approach and pragmatic concept for the planning and design of changeable factories, proven in many industrial projects.

In the first part, change drivers of manufacturing enterprises and the resulting new challenges are considered.

The second part concerns the design of the production facilities on the different factory levels under functional, organizational, architectural and strategic aspects considering environmental, health and safety aspects.

The third part is dedicated to the planning process that is based on a synergetic interaction of process and space. The accompanying project management of the planning and construction phase and the facility management for the effective utilization of the built premises close the book.

Prof. em. Dr.-Ing. Hans-Peter Wiendahl has been director for 23 years of the Institute of Factory planning and Logistics at the Leibniz University of Hannover in Germany.

Prof. Dr.-Ing. habil. Peter Nyhuis is since 2003 Managing Director of the Institute of Factory

Planning and Logistics at the Leibniz University of Hannover in Germany.

Univ.-Prof. Dr.-Ing. Dr. h.c. mult. Hans-Peter Wiendahl, born in 1938, studied mechanical engineering at the RWTH Aachen University, Germany. After studies at MIT and Cambridge, he completed his PhD in 1970 and his habilitation in 1972 at RWTH Aachen. Later he transferred over to the industry, heading first the Department for Planning and Quality at Sulzer Escher Wyss in Ravensburg and since 1975, their department of paper machinery design and technology. In 1979 he was appointed as a professor at the Leibniz University of Hannover and became the director of the university’s Institute of Production Systems and Logistics (IFA). He led the institute until 2003. From 1988 to 1992 Professor Wiendahl was also the vice-president of the Leibniz University of Hannover. From 1988 to 2007 he was a managing partner of the Institute for Integrated Production Hannover (IPH).

Prof. Dipl.-Ing. BDA architect Jürgen Reichardt is a professor at the msa, muenster school of architecture and partner of the RMA Reichardt - Maas - Associated Architects in Essen.

Univ.-Prof. Dr.-Ing. habil. Peter Nyhuis, born in 1957, studied mechanical engineering at the Leibniz University of Hannover, Germany. He completed his PhD at the university’s Institute of Production Systems and Logistics (IFA) in 1991 and his habilitation there in the field of production logistics in 1999. In the same year, he began working as a project manager and partner at Siemens SPLS Supply Chain Consulting in Munich. Since 2003, he has been appointed both as a professor for Production Systems, Logistics and Work Sciences as well as the director of the Institute of Production Systems and Logistics at the Leibniz University of Hannover. Since 2008 he is a managing partner of the Institute for Integrated Production Hannover (IPH). Professor Nyhuis is the author of numerous book contributions and articles on manufacturing and production planning and control, Logistic Operating Curves, shortening setup