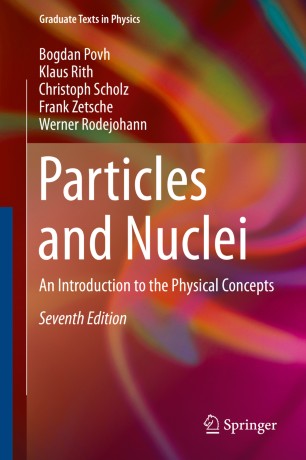 An Introduction to the Physical Concepts

This well-known introductory textbook gives a uniform presentation of nuclear and particle physics from an experimental point of view.

The first part, Analysis, is devoted to disentangling the substructure of matter. This part shows that experiments designed to uncover the substructures of nuclei and nucleons have a similar conceptual basis, and lead to the present picture of all matter being constructed from a small number of elementary building blocks and a small number of fundamental interactions.

The second part, Synthesis, shows how the elementary particles may be combined to build hadrons and nuclei. The fundamental interactions, which are responsible for the forces in all systems, become less and less evident in increasingly complex systems. Such systems are in fact dominated by many-body phenomena. A section on neutrino oscillations and one on nuclear matter at high temperatures bridge the field of "nuclear and particle physics" and "modem astrophysics and cosmology.

The seventh revised and extended edition includes new material, in particular the experimental verification of the Higgs particle at the LHC, recent results in neutrino physics, the violation of CP-symmetry in the decay of neutral B-mesons, the experimental investigations of the nucleon's spin structure and outstanding results of the HERA experiments in deep-inelastic electron- and positron-proton scattering. The concise text is based on lectures held at the University of Heidelberg and includes numerous exercises with worked answers. It has been translated into several languages and has become a standard reference for advanced undergraduate and graduate courses.