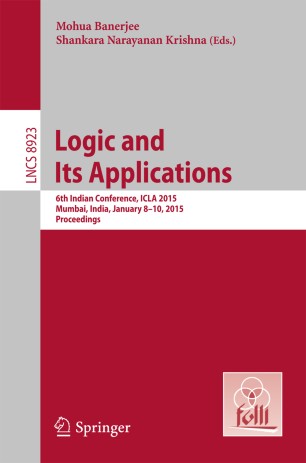 This book collects the refereed proceedings of the 6th Indian Conference on Logic and Its Applications, ICLA 2015, held in Mumbai, India, in January 2015.
The volume contains 13 full revised papers along with 3 invited talks presented at the conference. The papers were selected after rigorous review, from 23 submissions. They cover topics related to pure and applied formal logic, foundations and philosophy of mathematics and the sciences, set theory, model theory, proof theory, areas of theoretical computer science, artificial intelligence, systems of logic in the Indian tradition, and other disciplines which are of direct interest to mathematical and philosophical logic.