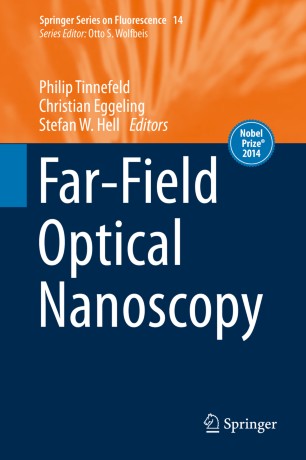 This book describes developments in the field of super-resolution fluorescence microscopy or nanoscopy. In 11 chapters, distinguished scientists and leaders in their respective fields describe different nanoscopy approaches, various labeling technologies, and concrete applications. The topics covered include the principles and applications of the most popular nanoscopy techniques STED and (f)PALM/STORM, along with advances brought about by fluorescent proteins and organic dyes optimized for fluorescence nanoscopy. Furthermore, the photophysics of fluorescent labels is addressed, specifically for improving their photoswitching capabilities. Important applications are also discussed, such as the tracking and counting of molecules to determine acting forces in cells, and quantitative cellular imaging, respectively, as well as the mapping of chemical reaction centers at the nano-scale.

The 2014 Chemistry Nobel Prize® was awarded for the ground-breaking developments of super-resolved fluorescence microscopy. In this book, which was co-edited by one of the prize winners, readers will find the most recent developments in this field.

Stefan W. Hell is director at the Max Planck Institute for Biophysical Chemistry in Göttingen and leads the Department of NanoBiophotonics, as well as the High Resolution Optical Microscopy division at the German Cancer Research Center (DKFZ) in Heidelberg. He is honorary professor of experimental physics at the University of Göttingen and holds a position as adjunct professor of physics at the University of Heidelberg.

Stefan Hell has invented the first method, which took optical microscopy into the nano-dimension, breaking Abbe’s diffraction-limited resolution barrier. This breakthrough has been honored with the 2014 Nobel Prize® in Chemistry, awarded jointly to Stefan W. Hell and his colleagues Eric Betzig and William E. Moerner.

Christian Eggeling is Professor of Molecular Immunology at the University of Oxford and Scientific Director at the Wolfson Imaging Centre Oxford, Weatherall Institute of Molecular Medicine. Eggeling received his PhD from the Georg-August University Göttingen. Afterwards he did postdoctoral research at the Karolinska-Institute in Stockholm, Sweden. From 2000 to 2004 Eggeling worked at the company Evotec OAI AG Hamburg, before joining the NanoBiophotonics department of Stefan Hell at the Max-Planck-Institute for Biophysical Chemistry in Göttingen. In 2012 he moved to Oxford as Group Leader of the MRC Human Immunology Unit (HIU).

“This is the first comprehensive book that summarizes most of the superresolution imaging techniques, and as such it is an excellent resource for newcomers to the field. … a unique and much needed resource that contains a detailed description of all the superresolution techniques and methods that led to the award of the Nobel Prize in Chemistry in 2014. It is a great first resource for anyone wanting to learn more about this rapidly evolving field of research.” (Thomas Huser, Analytical and Bioanalytical Chemistry, Vol. 408, 2016)