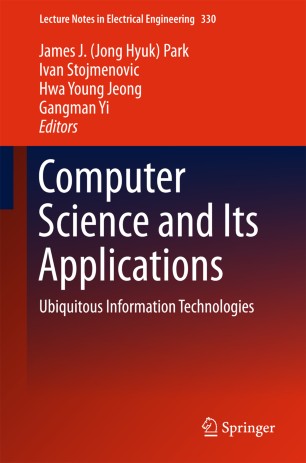 Computer Science and its Applications

The 6th FTRA International Conference on Computer Science and its Applications (CSA-14) will be held in Guam, USA, Dec. 17 - 19, 2014. CSA-14 presents a comprehensive conference focused on the various aspects of advances in engineering systems in computer science, and applications, including ubiquitous computing, U-Health care system, Big Data, UI/UX for human-centric computing, Computing Service, Bioinformatics and Bio-Inspired Computing and will show recent advances on various aspects of computing technology, Ubiquitous Computing Services and its application.

Professor James J. Park received his Ph.D. degree in Graduate School of Information Security from Korea University, Korea. From December, 2002 to July, 2007, Dr. Park had been a research scientist of R&D Institute, Hanwha S&C Co., Ltd., Korea. From September, 2007 to August, 2009, He had been a professor at the Department of Computer Science and Engineering, Kyungnam University, Korea. He is now a professor at the Department of Computer Science and Engineering, Seoul National University of Science and Technology (SeoulTech), Korea. Dr. Park has published about 100 research papers in international journals and conferences. He has been serving as chairs, program committee, or organizing committee chair for many international conferences and workshops. He is a president of the Future Technology Research Association International (FTRA) and Korea Information Technology Convergence Society (KITCS). He is editor-in-chief of Human-centric Computing and Information Sciences(HCIS) by Springer, International Journal of Information Technology, Communications and Convergence (IJITCC) by InderScience, and Journal of Convergence (JoC) by FTRA Publishing. He is Associate Editor / Editor of 14 international journals including 8 journals indexed by SCI(E). In addition, he has been serving as a Guest Editor for international journals by some publishers: Springer, Elsevier, John Wiley, Oxford Univ. press, Hindawi, Emerald, Inderscience. His research interests include security and digital forensics, Human-centric ubiquitous computing, context awareness, multimedia services, etc. He got the best paper awards from ISA-08 and ITCS-11 conferences and the outstanding leadership awards from IEEE HPCC-09, ICA3PP-10, IEE ISPA-11, and PDCAT-11. Dr. Park' s research interests include Digital Forensics, Security, Ubiquitous and Pervasive Computing, Context Awareness, Multimedia Service, etc. He is a member of the IEEE, IEEE Computer Society, KIPS, KICS, KIISC, KMMS, KDFS and KIIT.

Professor Hwa Young Jeong received the MS degree in computer engineering in 1994 and the Ph.D in computer engineering in 2004 from the Kyung Hee University. Currently, he is a Professor in the Humanitas College at Kyung Hee University, Seoul, South Korea. He is a reviewer of MTAP (Multimedia Tools and Application) at Springer. And he is a member of the Standard Words Committee in Ministry of Information and Communication Republic of Korea. He has worked on the editorial board of the journal of the Korea Society for Internet Information from 2004. He was a system and software engineer in the Aju System Co., and CNA Research Inc., 1994 ~ 1999. In there, he had worked and programmed the GUI system of semiconductor testing machine which was called IC Test Handler. He was assistant professor, Dept of E-Business of Yewon Art University in 2000~2005. He is Director of General Affairs and publication chair of FTRA. Also he is an editor for JoC(Journal of Convergence), Human-centric Computing and Information Sciences by Springer and Journal of Convergence Information Technology. His research interests include design of system software, software and application with security, manufacturing system software, e/u-learning system.