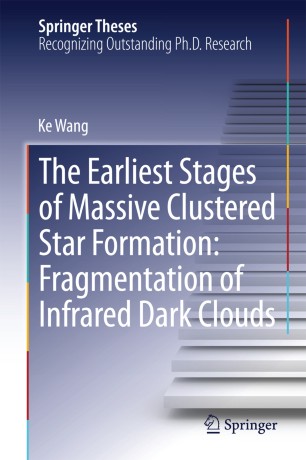 This thesis presents an in-depth, high-resolution observational study on the very beginning of the formation process: the fragmentation of dense molecular clouds known as infrared dark clouds (IRDCs). Using the Submillimeter Array (SMA) and Very Large Array (VLA) radio interferometers, the author has discovered a common picture of hierarchical fragmentation that challenges some of the leading theoretical models and suggests a new, observation-driven understanding of how massive star formation in clustered environments may begin: it is initiated by the hierarchical fragmentation of a dense filament from 10 pc down to 0.01 pc, and the stellar mass buildup is simultaneously fed by hierarchical accretion at similar scales. The new scenario points out the importance of turbulence and filamentary structure, which are now receiving increasing attention and further tests from both observers and theorists.

Dr. Ke Wang is currently a research fellow at the European Southern Observatory (ESO) headquarters in Garching, Germany, with functional work at the Atacama Large Millimeter/submillimeter Array (ALMA). He received his Ph.D degree in astrophysics from Peking University in 2012. Most of his thesis work was carried out at the Harvard-Smithsonian Center for Astrophysics (CfA) in Cambridge, USA, during a pre-doctoral fellowship with duty at the Submillimeter Array (SMA). In 2011, he was awarded a European Union grant to conduct his first postdoctoral research at the Kapteyn Astronomical Institute in Groningen, the Netherlands. Afterwards, he joined ESO in October 2012. He is an enthusiastic astronomer with expertise in radio interferometers, a frequent user of world class telescopes including the SMA and the Jansky Very Large Array (JVLA), now an ALMA astronomer on duty. His main research interest is the early phase of massive star formation, from Planck cold cores, infrared dark clouds to interstellar filaments.