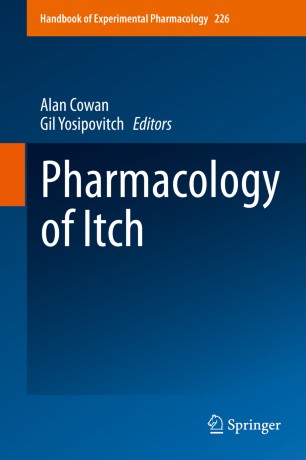 Basic research on the pharmacology of itch has exploded in the wake of two very influential papers that were published in Nature (2007) and Science (2009). Long overlooked as a milder form of pain, itching has rapidly gained a new appreciation in both research and clinical communities because of its complexity and its negative effects on the quality of life of the distressed patients. Like pain, not all itches are the same. Unlike pain, there are no standard drugs equivalent to aspirin and morphine. Epidemiological studies emphasize the high incidence and economic costs of itch (pruritus). It is the most prevalent symptom of a wide variety of allergic and inflammatory skin conditions (e.g., psoriasis, atopic dermatitis), is associated with several systemic diseases (e.g., chronic kidney and liver disease), and occurs in patients undergoing hemodialysis, spinal administration of opioids, and in those suffering from AIDS. The reader will learn about the multiple pathways for itch and their interactions with pain. The relationship between these closely related, yet distinct sensory phenomena, will be emphasized. Both itch and pain use several common molecules to send signals to the brain. Thus, drugs that have been, and are being, developed as analgesics may also attenuate intractable itch. This has been an exciting and very necessary turn of events since traditional H-1 receptor antagonists are ineffective in blocking the pruritus associated with kidney failure and cholestasis. The clinical chapters will provide insights into contemporary treatment regimens for pruritus in different human scenarios.