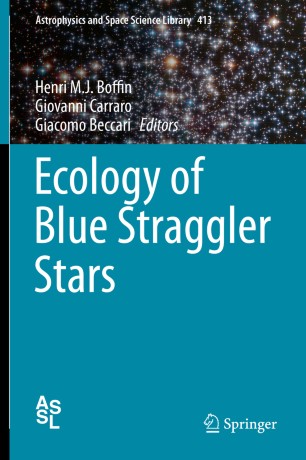 The existence of blue straggler stars, which appear younger, hotter, and more massive than their siblings, is at odds with a simple picture of stellar evolution. Such stars should have exhausted their nuclear fuel and evolved long ago to become cooling white dwarfs. They are found to exist in globular clusters, open clusters, dwarf spheroidal galaxies of the Local Group, OB associations and as field stars.

Henri Boffin has been an ESO Paranal Operations Staff Astronomer since August 2010. He obtained his PhD from the Université Libre de Bruxelles, Belgium, in 1993, working on explaining chemically peculiar red giants, in particular Barium stars. Since then, his research is devoted to the world of close binary stars, their formation and evolution. To this aim, he combines both observational and theoretical work, including hydrodynamical simulations. In the year 2000 he organised the first international workshop on Astro-tomography. His current scientific interests also include symbiotic stars, binary nuclei of planetary nebulae, and Am stars, but more generally, all interacting binary stars.

Giovanni Carraro is staff astronomer at ESO Chile since 2007. He got his PhD in 1996 from Padova University, where he holds a professorship position. He works in the field of resolved stellar populations, mainly star clusters. He is also interested in galaxy formation and the outer solar system. He is author of more than 200 refereed publications. He is the current president of IAU Commission 37 “Star Clusters and Associations”, and serves as scientific editor of the Astrophysical Journal.

Giacomo Beccari works as a staff astronomer at ESO since 2012. He obtained a PhD in Italy with a thesis on the study of exotic stellar populations in the globular cluster 47 Tucanae which was awarded with the prize "Tacchini" from the Italian Astronomical Society as the best Italian PhD thesis in astrophysics of 2007. He left Italy in 2008 for a Fellowship in Space Science at ESA/ESTEC (The Netherlands) and in 2010, he moved to ESO as a Research Fellow first and then as a staff astronomer. Giacomo's research interests are resolved stellar populations in clusters, from the study of binaries and exotic objects (BSS, MSPs, IMBHs, CVs) in galactic globular clusters to protoplanetary disks around young stars in massive star-forming regions.

“The book is definitely to be welcomed as a much-needed contribution to the study of stellar physics. It should be in every departmental library.” (Elizabeth Griffin, The Observatory, Vol. 135 (1249), December, 2015)