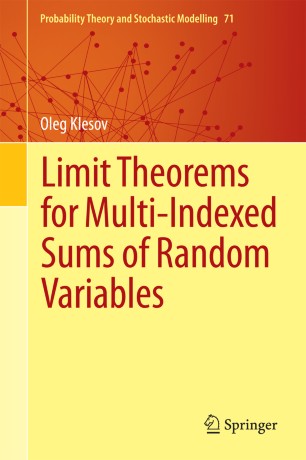 Presenting the first unified treatment of limit theorems for multiple sums of independent random variables, this volume fills an important gap in the field. Several new results are introduced, even in the classical setting, as well as some new approaches that are simpler than those already established in the literature. In particular, new proofs of the strong law of large numbers and the Hajek-Renyi inequality are detailed. Applications of the described theory include Gibbs fields, spin glasses, polymer models, image analysis and random shapes.

Limit theorems form the backbone of probability theory and statistical theory alike. The theory of multiple sums of random variables is a direct generalization of the classical study of limit theorems, whose importance and wide application in science is unquestionable. However, to date, the subject of multiple sums has only been treated in journals.

The results described in this book will be of interest to advanced undergraduates, graduate students and researchers who work on limit theorems in probability theory, the statistical analysis of random fields, as well as in the field of random sets or stochastic geometry. The central topic is also important for statistical theory, developing statistical inferences for random fields, and also has applications to the sciences, including physics and chemistry.