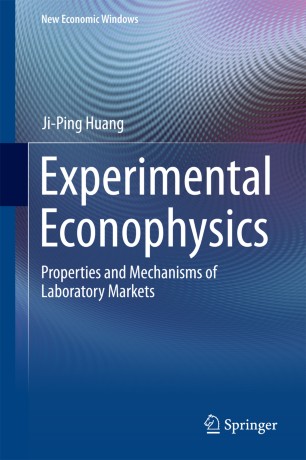 Properties and Mechanisms of Laboratory Markets

Empirical econophysics is based on the analysis of data in real markets by using some statistical tools borrowed from traditional statistical physics. Differently, inspired by the role of controlled experiments and system modelling (for computer simulations and/or analytical theory) in developing modern physics, experimental econophysics specially relies on controlled human experiments in the laboratory (producing data for analysis) together with agent-based modelling (for computer simulations and/or analytical theory), with an aim at revealing the general
cause-effect relationship between specific parameters and emergent properties of real economic/financial markets. This book covers the basic concepts, experimental methods, modelling approaches, and latest progress in the field of experimental
econophysics.

J. P. Huang received the Ph.D degree in Physics from The Chinese University of Hong Kong, Hong Kong, China, in 2003. Since 2005, he has been a Professor in the Department of Physics, Fudan University, Shanghai, China. He was a Research Fellow of the Alexander von Humboldt foundation (Germany) in 2004–2005. His current research interests include econophysics and soft matter physics. His homepage: http://www.physics.fudan.edu.cn/tps/people/jphuang/new/.