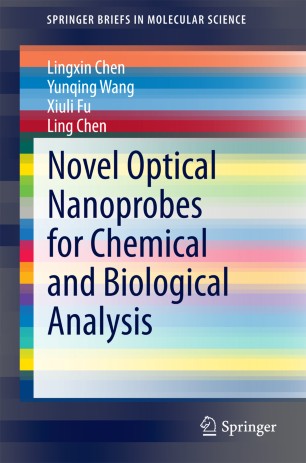 Novel Optical Nanoprobes for Chemical and Biological Analysis starts with a brief introduction to several kinds of versatile nanomaterials with novel optical properties, such as gold/silver nanoparticles, quantum dots, upconversion nanoparticles and graphene. It mainly focuses on the latest sensor design strategies, which apply the optical properties of nanomaterials to various detection techniques including colorimetry, fluorescence, and surface-enhanced Raman scattering (SERS). These sensors are attractive owing to their high sensitivity, high specificity, and potential for easy quantification of targets in many applications, such as conventional chemical and biological analysis, clinical diagnosis, and intracellular system sensing as well as single-molecule detection. The challenges and future perspectives for optical nanoprobes are also presented, such as the increase in sensitivity for real environmental and clinical samples, the design and application of multifunctional nanoplatforms, and biocompatibility of nanomaterials.

Lingxin Chen received his Ph.D. from the Dalian Institute of Chemical Physics, Chinese Academy of Sciences, in 2003. After two years working as a postdoc at the Department of Chemistry, Tsinghua University, China, he joined the Department of Applied Chemistry, Hanyang University, Ansan, Korea, in 2006, first as a research fellow and then as a research professor. He is now a professor at the Yantai Institute of Coastal Zone Research, under the Chinese Academy of Sciences’s “One Hundred Outstanding Young Chinese Scientists” program. His research interests include study of novel properties of materials such as functionalization of nanoparticles for developing nanoscale biochemical analysis methods, molecular imprinting- based sample pretreatment technology, chromatography (including microfluidic chip) combined technology, and the microbial degradation mechanism of pollutants.

Yunqing Wang received his Ph.D. in Pharmaceutical Analysis from the China Pharmaceutical University, China, in 2009. During the same year, he joined Dr. Lingxin Chen’s Laboratory of Environmental Microanalysis and Monitoring of at the Yantai Institute of Coastal Zone Research, Chinese Academy of Sciences, as a research assistant. His current research interests focus on the development of quantum dot and noble metal nanoparticle -based optical sensors and the applications in bioimaging.

Xiuli Fu received his Ph.D. in Yantai Institute of Coastal Zone Research, Chinese Academy of Sciences, in 2013. He is now a postdoc at the Department of Bionano Engineering, Hanyang University, Ansan, Korea. Her current research interest focuses on SERS based optical sensors.

“This is a potentially useful little book that summarises the main types of nanoparticles used for optical detection of molecules and ions in the chemical and biomedical areas. The layout is neat and the treatment is fairly concise and brief. … I would suggest that it does serve as a useful compendium of the optical probe methods and with so many references all contained within a single volume, along with a very readable narrative it will be useful.” (Peter J. Dobson, Contemporary Physics, Vol. 58 (2), February, 2017)
Buy options